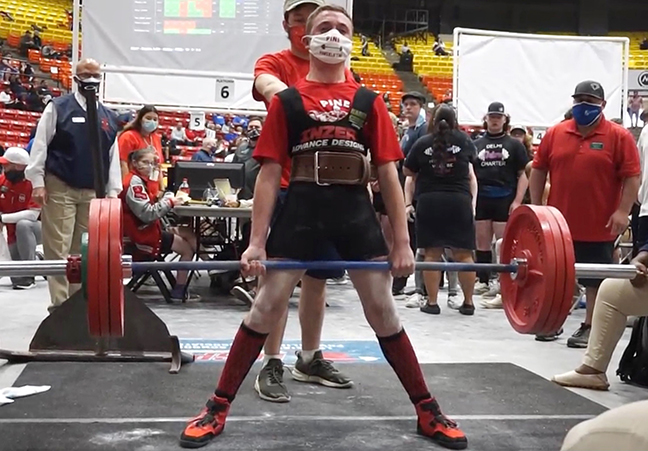 Pine’s Braeden Arceneaux and Franklinton’s Shelton Jenkins captured powerlifting state titles at last week’s meet that was held at the Fant-Ewing Coliseum on the campus of the University of Louisiana in Monroe.

“It feels good to be on top because I worked my tail off the whole year,” Arceneaux said.

This was Arceneaux’s second time making it to state, but the first time competing at state. Last year’s state meet was cancelled because of the COVID-19 pandemic.

Arceneaux is the first powerlifter from Pine to win a state title.

Arceneaux said he was a little bit nervous.

“Being in the coliseum with everybody watching made me a little nervous, but I pushed through,” Arceneaux said.

Arceneaux said the nerves went down after this first lift.

He talked about his key to winning.

“Pushing through all of my lifts and making sure I warmed up right,” Arceneaux said.

Jenkins, a junior, is the Division II state champion in the 198.3-pound weight class.

Jenkins set the Division II state record in bench press for the 198.3s with a 410. Jenkins broke the record on all three attempts.

“It meant a lot to me because I worked so hard for it,” Jenkins said. “I worked all year for it.”

Like Arceneaux, this was Jenkins’ second time reaching state and first time competing with last year’s state competition getting cancelled.

“It was pretty nice because I’ve never seen that many people at once for powerlifting,” Jenkins said about his first time performing at state.

Also locally, Northlake Christian School’s Emmanuel Powell, who is a resident of Bogalusa, is the Division IV state champion in the 275.5s.

Four more lifters from Franklinton made it to state.

Jaylin Magee and Ethan Sharp are in the 181.8s.

North Vermilion was second with 33 points, followed by South Terrebonne’s 27, Assumption’s 21 and Leesville rounded out the top five with 17 points.

Franklinton was eighth with 11 points. Peabody also had 11 points, but Franklinton won the tiebreaker, which is most first-place finishes, 1-0.

Bogalusa had two lifters in Kevin Wells and Derek Keating. Both made it to state last year.

Lutcher won the Division III championship with 43 points, as 17 teams put up points.

Iota won the tiebreaker over Abbeville for second with each posting 36 points.

Buckeye and Church Point tied for fourth with 22 points to round out the top five.

Bogalusa was 14th with two points.

Pope John Paul II and Northlake Christian School were second and third in the team competition with 31 and 25 points respectively, as 19 teams posted points. 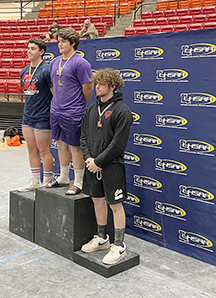 COURTESY PHOTO
Franklinton’s Shelton Jenkins is pictured on the podium in the middle after capturing the Division II state title in the 198.3-pound weight class.