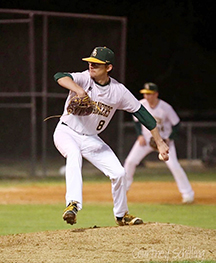 Bowling Green School’s Bradlee Davidson set the school record for strikeouts in one game in a 4-1 victory over CHEF in a road game that was held on Thursday.

Davidson struck out 19 hitters over 6-1/3 innings, as every out that he recorded was via the strikeout. Davidson allowed one run on three hits with just one walk.

Jeffrey Slaughter continued the theme in relief. He pitched the final 2/3 of an inning and struck out two.

Every out that Bowling Green pitchers recorded were from the strikeout.

Sammy Phelps went 2-for-3 with a run batted in.

Logan Serpas and Ben Galloway both had a hit and an RBI.

Rece Dillon and Keaton Ruffino scored a run each.