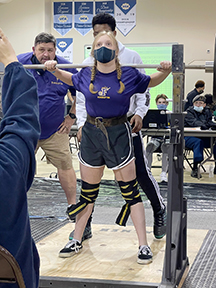 Washington Parish will be well represented in the state powerlifting meet, which will begin Thursday and run through Saturday.

Fifteen lifters from schools that are in Washington Parish and two more locals reached the state meet.

Powerlifters got to the state meet through regionals.

To reach state, the lifter had to either win their weight class at the regional meet or come in the top 10 of their division, but when somebody won their regional, that counted as a spot toward state, so if somebody from a Division I school won at regionals, there were nine spots left for state. There were six regions.

The group features a pair of No. 1 seeds in Franklinton’s Shelton Jenkins and Pine’s Braeden Arceneaux.

Both lifters reached the state meet last year, but the event was cancelled because of the COVID-19 pandemic.

The boys and girls have one No. 2 seed each in Franklinton’s Jaylin Magee and Tayte Landry.

Franklinton’s Angel Dufrene, who made state last year, is a No. 4 seed in the 97s.

Two are sixth seeded in Franklinton’s Arielle Magee and Bogalusa resident Matthew Kirkland of Pope John Paul II. Magee is in the 220.3s, while Kirkland is in the SHWs.

Washington Parish features four No. 7 seeds in Franklinton’s Adam Galloway and Shalen Tomeny along with Bogalusa’s Kevin Wells and Derek Keating. Galloway, who was an alternate last year, is in the 275.5s, while Wells made it in the 148.8s, Keating is in the 275.5s and Tomeny competes in the 198.3s. Wells and Keating made state in 2020. Bogalusa is in Division III.

One local is a No. 8 seed in Franklinton’s Grace Mitchell, who made it in the 132.5s. Mitchell reached state last year.

Three Franklinton lifters are No. 9 seeds in Collin Penny, Hannah Spears and Ava Roshto. Penny lifts in the 198.3s, while Spears is in the 123.5s and Roshto is in the 132.3s.

Two Franklinton lifters are No. 10 seeds in Ethan Sharpe and Marleigh Schilling. Sharpe is in the 198.3s and Schilling is in the 148.8s. Schilling reached state last year.

The state meet will be held at Fant Ewing Coliseum on the campus of the University of Louisiana in Monroe.