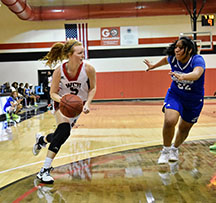 “Our season ended because of COVID, so we were kind of upset about it, but this kind of shines a light on it. I’m very appreciative of my coaches and teammates. I get them the ball, they score and I get the assist,” Seal said.

Seal, a 2017 Bowling Green School graduate, was the co-Conference Player of the Year along with Faulkner University’s Ashlyn Adkins.

Seal averaged 10 points per game this season. She dished out 6.5 assists, pulled down 6.4 rebounds and made 1.8 steals per game. Seal was second in the NAIA in assists per game.

Seal talked about what the award means to her.

“Pretty much busting my tail this summer, getting shots up with my dad and in the weightroom. It’s kind of one of those hard work paying off type of things,” Seal said. “I don’t score a lot of points. I’m a team first type of player. Usually these awards go to points scoring players, but I think I did a lot in the other stat categories. I did more scoring this year than usual. I kind of put myself as an option.”

This season, William Carey University posted a 14-5 overall record and 10-4 in conference play.