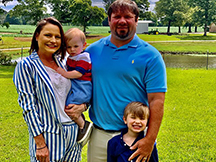 Varnado has named Adam Brumfield its new head football coach and athletic director.
“When I was here three years ago, I really enjoyed the kids, I really enjoyed working for (principal) Mrs. (Jennifer) Beninato,” Brumfield said. “I feel like she’s a principal I can trust and that goes a long way. From a football standpoint, I look forward to going out and competing in 2A, however after this year, we’ll be getting back into 1A and we can make some of those deep playoff runs like we did when I was a coordinator here.”
Brumfield said he tells people all of the time that Varnado is a place where you have a chance have postseason success.
“The kids work hard,” Brumfield said. “They’ve always had athletes here at Varnado. There are some things that need to be cleaned up like the weightroom, but once we get that cleaned up and kind of trust the process, we can get back to making deep runs in the playoffs.”
Brumfield brings 17 years of coaching experience to Varnado.
He spent the last three seasons as Bogalusa’s head coach. While there, Brumfield guided the Lumberjacks to two playoff appearances. One of his biggest accomplishments was helping Bogalusa defeat rival Franklinton in the last two years. The first win snapped an 18-game losing streak to the Demons.
Brumfield heads back to Varnado where he coached three years ago, which was prior to him going to Bogalusa.
Brumfield spent two years at Varnado. During his stint, he was the Wildcats’ offensive coordinator, strength and conditioning coach, head boys track/field coach and head powerlifting coach.
Brumfield began his coaching career at Franklinton, where he spent 10 years. While with the Demons, Brumfield coached multiple positions on offense, such as running backs, wide receivers and offensive line. He was the assistant head coach for two years and the head junior varsity coach for eight. Brumfield was also the head coach for tennis at Franklinton.
Brumfield left Franklinton to go to Tylertown to be with his mother following his father’s passing. Brumfield coached one year at Dexter and Tylertown. He was the offensive coordinator, strength and conditioning coach and head baseball coach at each school.
Varnado principal Jennifer Beninato praised her new head coach and athletic director.
“I couldn’t be more thrilled to welcome Coach Brumfield back to the Wildcat Family as athletic director and head football coach,” Beninato said. “His energy is contagious and I know he will work hard to build our program. His experience is impressive, but what sets him apart is his desire that he build life-changing relationships with student-athletes. On the field, I am looking forward to watching our program flourish under his leadership.”