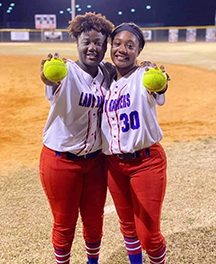 COURTESY PHOTO/Kenasha Cotton Twin sisters hit home runs for Pine in their game against Franklinton last week. Makia Clark (left) and Kiyasha Clark each hit a home run for the Lady Raiders during their contest.

Franklinton’s Lady Demons started the season with a 3-1 record, while Pine’s Lady Raiders began 2-2 in softball.

Franklinton played in the Albany Tournament last Saturday and won both games.

Skylar Branch hit a homer, drove in three runs and scored two runs as part of a three-hit day.

Missouri Varnado singled twice and had an RBI.

Aayah Faour went 2-for-3 with an RBI and two runs scored.

Bailey Brooks posted a hit and a run batted in.

Aleigha Fussell allowed no hits in two shutout innings with four strikeouts and no walks.

Branch went three frames, allowing one unearned run on four hits with a strikeout and no walks.

The next game was an 8-5 win over St. Thomas Aquinas.

Schexnider and Albanie Fussell both went 2-for-4 with an RBI and a run scored each.

Aleigha Fussell drove in a run.

On Wednesday, Franklinton was defeated by Doyle, 12-0, at home.

The Lady Demons had two hits.

Welch had both hits with one being a double.

On Thursday, Franklinton won its game over Pine, 7-3, at home.

Fowler recorded two hits, both were doubles, with two RBIs and a run scored.

Aleigha Fussell went 2-for-3 with an RBI.

Albanie Fussell and Brooks both singled, scored a run and drove one in.

Aleigha Fussell allowed two earned runs on seven hits with seven strikeouts and no walks in a complete-game performance.

Makia Clark and Kiyasha Clark both homered for the Lady Raiders. Both players posted two hits, a run scored and an RBI. Makia and Kiyasha are twin sisters.

Magee missed hitting for the cycle by only a triple. She singled, doubled, homered and scored two runs.

Alyssa Phelps recorded a double and two singles with a run scored.

Alexa Lee and Bailey both singled.

The next was an 8-7 loss to St. Scholastica Academy on the road on Feb 23.

Sumrall doubled and scored a run.

Magee posted a single and a run scored.

Makia Clark doubled and drove in a run.

Magee posted a hit, an RBI and two runs scored.

Brooks had an RBI.

Winning pitcher Alyssa Phelps threw all five innings, allowing one unearned run on one hit with six strikeouts and one walk.