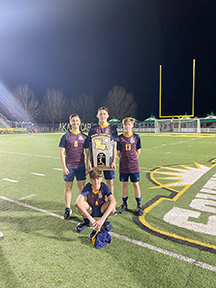 Pope John Paul II’s Jaguars made history on Wednesday night when they won the school’s first ever boys soccer state championship, defeating Episcopal in the finals

The Jaguars captured the Division IV title with a 2-1 win over Episcopal at Strawberry Stadium on the campus of Southeastern Louisiana University.

Four of Pope John Paul II’s players are from Bogalusa, including Will Adams, George Arata, Landon Lott and Wilson Varnado.

“It’s a major achievement for the boys,” Pope John Paul II coach Danny Clavier said on Thursday. “I think it’s a great morale and spirit builder for the school. I’ve seen that by the fan support last night, which was amazing, and in the hallways this morning. We definitely outnumbered them 3-1 in the stands. It was, of course, the boys and the coaching staff — phenomenal feeling. All of my coaching buddies have described the feeling, but you have to experience it. You see it also in the text messages, phone calls, Facebook messages, you see it from all sides.”

The goal was the only tally the Jaguars allowed in the playoffs.