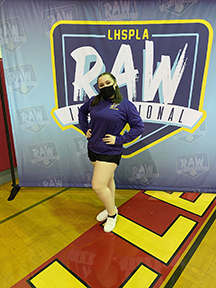 Franklinton’s Tayte Landry set three records, held on to one of them and came in second in her weight class, while Hannah Spears and Marleigh Schilling were second at the Abbeville RAW Invitational that took place on Saturday, Feb. 13.

Landry, who is in the 198-pound weight class, squatted 270, benched 100 and deadlift 275 for 645 and a second-place tally. Her squat, deadlift and total broke the meet records. Landry lifted before the winner Natchitoches Central’s Briona Touisaint. Touisaint reset the record for deadlift and total at 280 and 665, respectively. Sticking with the locals in the 198s, Shaelyn Tomeny was fourth with a 460 after squatting 155, benching 100 and deadlift 205 for 460.

Schilling was runner up in the 148s with 515 total after squatting 205, benching 90 and deadlift 220. Southside’s Jasmine Anderson won at 610. Franklinton’s Isabella Lambert squatted and deadlifted 155.

Franklinton was the only local team in the meet.

Trinity Miller was fourth SHW with a 490 after squatting 180, benching 95 and deadlifting 215. Natchitoches Central’s Sharissa Johnson won at 905.

Franklinton will be back in action at the regional meet that will take place on Friday, Feb. 26 at Pope John Paul II.