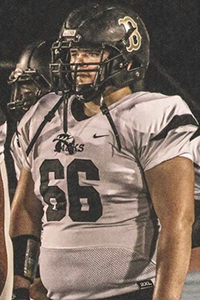 The senior plays football and competes in powerlifting.

In football, Keating is a guard and defensive tackle.

Keating was a first-team all-district player this season and he made the second team the two years before that.

The three all-district honors were for the offensive line.

In powerlifting, Keating made it to state twice. He came in ninth in 2019. Last week’s state meet was canceled because of the COVID-19 pandemic.

“Derek is an extremely hard working respectable young man,” said Adam Brumfield, who coached Keating in football. “He listens and is extremely coachable. He works hard in the weight room and it shows. He’s proof that works breeds success, and because of his work ethic he has a very bright future.”

What do you enjoy most about playing your sport?

It’s like a therapeutic way of thinking for me. It’s just fun for me.

Keeping up my grades because it builds responsibility because you have to focus on two things.

My parents (Joshua and Robin Keating) and my coaches because they push me. There’s a couple of times when I thought I wasn’t going to be able to play past high school. They just told me to be patient. My coaches and my parents gave me extra motivation.

Brandon Burlsworth from the movie Greater because he followed his dream even when the team he went to visit told him he wouldn’t start. He ended up starting and getting all-American. He also went to the NFL. He’s an inspiration to me. (Greater is a movie based on a true story)

It’s the community and the stuff we do. It’s just a good community to me.