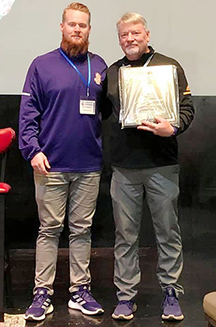 According to the Are You Serious Sports Network’s Facebook page, the award is voted on by the committee to the coach that displays the most ethics, character and respect to the game.

The Facebook page said that Tageant is the second coach in the state to win the award.

Tageant has 516 wins in 34 years as Franklinton’s head baseball coach.

“I was shocked to get it and I was very humbled to receive the award and to be mentioned in the same sentence with Tony Robichaux,” Tageant said. “He was one of the best coaches in the history of the nation, who was well respected throughout the state and the nation. He spoke about pitching all over the nation and he was the best speaker I ever heard speak about pitching.”

Robichaux coached for 33 years in Division I and 25 years at the University of Louisiana in Lafayette. Prior to going to Louisiana, he was McNeese State University’s head coach from 1987-1994 where he had a record of 263-177. Robichaux posted a record of 1,177-767-2 with 914 wins coming with the University of Louisiana in Lafayette and was the 51st coach Division I coach to reach 1,000 wins. Robichaux took Louisiana to the 2000 College World Series along with 12 NCAA regionals and four NCAA Super Regionals.

Austin Bradford, who graduated from Franklinton in 2015, pitches for Louisiana and played for both Tageant and Robichaux.

Bradford currently has degrees in general studies and physical science. He is going for a Business Degree that he will get in May. Bradford also has two minors including math and business.

“When I saw that coach Tageant won it, it was a real touching moment because I got to play for both of them,” Bradford said. “Anybody that heard coach Ro talk knew the things that he taught and the principles he taught. It was hard when he passed away and I was happy to see them have an award for him. To see Coach ‘T’ win it was a touching moment because both of them stand for a lot of the same things.” 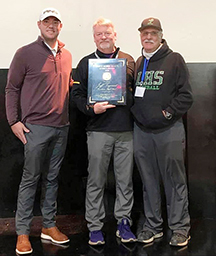