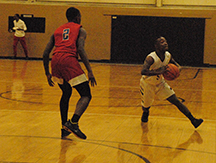 Bogalusa’s Lumberjacks defeated Independence and Franklinton in  games that took place on Tuesday and Wednesday.

Both games were at home.

Tuesday’s game was a 75-47 win over Independence.

Josh Taylor and Daylon Jackson tied for the team lead in points with 16 each.

Quientay Henry had 12 points in the victory.

Taylor led the way with 21 points.

Jaheim Jefferson tallied eight points and made a pair of 3-pointers.

Bogalusa’s next game will take place during the Archbishop Hannan Hustle Tournament, which is set for Dec. 28-30.

Franklinton’s next game will take place on the road Monday against Jesuit.