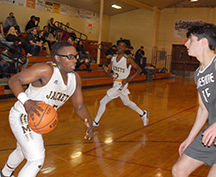 Kamron Brumfield and Dewayne Smith recorded six each. Smith made a 3-pointer.

Michquel Spears tallied five points. He made a 3-pointer.

JaQurrian Alexander had one in the win.

Mt. Hermon’s next game will take place on Monday against Amite in a road contest.