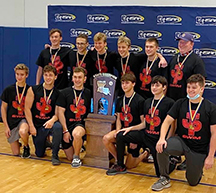 COURTESY PHOTO Pictured is Division 4 swimmming state champion Pope John Paul II Jaguars. One of their team members is Bogalusa resident Rex Perrette, who is a senior. Perrette is pictured in the first row, second from the left.

The senior helped the Jaguars to a Division 4 state title and was part of a relay team that won the state championship in November at the YMCA of Northwest Louisiana — Shreveport.

“I couldn’t put it into words, but it is amazing,” Perrette said. “I taught my team a quote from Col. (Bobby) Miller, ‘pain is temporary, pride is forever.’ I have never seen a team come together like this. I cried. It was the best way to end my senior year ever.”

Perrette was part of a 200-yard freestyle relay championship team that clocked in at 1 minute, 36 seconds to win by just over 12 seconds over Isidore Newman. The rest of the team included Davis Legnon, Jackson Marble and Thad Erato.

Newman was second at 285 with Ascension Episcopal third at 268, followed by The Dunham School at 120 and Metairie Park Country Day rounded out the top five with 102 points, as 17 teams posted points.

Perrette was part of a fourth place 400 freestyle relay team after a time of 3:56. The group also  featured Wyatt Combs, Tanner Arnold and Owen Campbell.

Individually, Perrette swam sixth in the 50 freestyle after swimming in 25.46 seconds. Teammate Legnon is the state champion with a time of 22.38.

Perrette was eighth in the 100 freestyle with a time of 58.23. Ascension Episcopal School’s Jack Aldridge won in 50.22.

Perrette, who canoes for Bogalusa Venture Crew 313, suffered an injury this summer that caused him to not be able to canoe in the 59th annual Bogue Chitto Race. Perrette recovered from the injury and had a solid state meet.

“After an injury I experienced in the summer, I didn’t think I’d be able to swim. Not only did I recover, but I recovered enough to swim faster than I ever had before. The corona guidelines, we had to wear a mask from the time we were on the blocks to the time we got out, so you really didn’t get a chance to catch your breath. I can tell you that every single person on the team gave everything they had,” Perrette said.

Perrette credited Miller for his success. 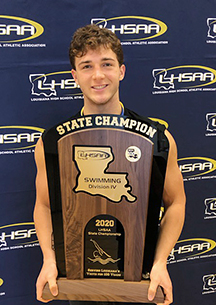