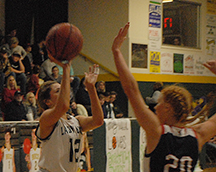 Bowling Green’s Lady Buccaneers were victorious in their games on Friday and Saturday over Lamar Christian School and Brookhaven Academy.

Bowling Green, who hosted both contests, defeated Lamar Christian School, 35-26, on Friday in District 4-3A competition.

Bailey Devall led the team in scoring with nine points and almost had a double-double. Devall, who made a 3-pointer, pulled down nine rebounds, made six steals and blocked two shots.

Anna Claire Crowe posted seven points that included a 3-pointer. She had two rebounds and an assist.

Peyton Dupuy a point and a rebound.

Javonnie Bickham pulled down three rebounds, dished out an assist and made a steal.

Bowling Green made 16 steals as a team in the win.

Wascom was Bowling Green’s leading scorer with 17 points. She made three 3-pointers. Wascom grabbed eight rebounds, dished out an assist and made two steals.

Bowling Green School will be back in action on Friday when they travel to Wayne Academy for a District 4-3A contest.