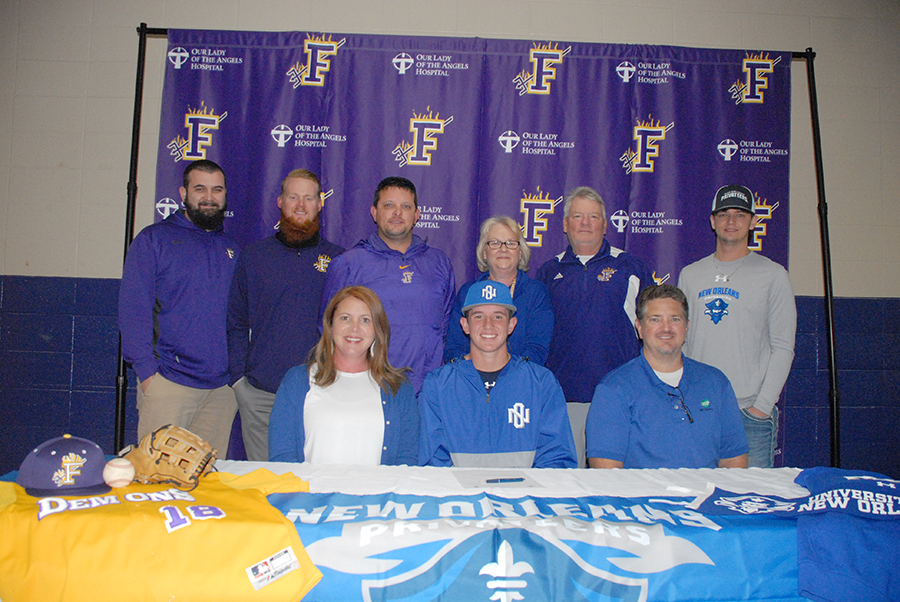 Franklinton’s Jordan McKenzie is headed to the Crescent City to play college baseball.

The senior has signed with the University of New Orleans to play for the Privateers.

“Me and my family were really excited,” McKenzie said. “It’s something I’ve always dreamed about doing. I’m just glad I’ve finally gotten there. It’s something I’ve worked for and I’ve had the support of my family. I was just excited that all of my hard work has paid off.”

McKenzie pitches and plays shortstop for the Demons and in travel with the Louisiana Knights.

McKenzie said he will probably be a pitcher in college.

Franklinton’s 2020 season was cut short because of the COVID-19 pandemic, but in his sophomore year, McKenzie was a second-team all-district infielder.

“It’s such a special recognition for Jordan,” Tageant said. “Jordan has worked so hard for, I know, the last 10 to 12 years. Always hitting in the batting cages, always throwing. I remember when his older brother Caleb played, you saw him, he had his glove in his hand. He’s gone to many different coaches and played with a lot of different fall teams, summer teams, just loves the game. This is truly a case where hard work pays off. To be given an opportunity at a Division I before the season is pretty special, pretty rare from what we’ve had here. I’m super proud of him and excited that he’s close enough to where we can go see him play some.”

Tageant said McKenzie has come a long way on the mound.

“His velocity’s increased, so I think they’re signing him as a pitcher, but he’s going to be our shortstop, and of course, he will pitch a good bit for us and bat in the middle of the lineup,” Tageant said. “So I’m thinking they’re definitely looking for him to improve. His fastball has hit 86, 87, and if he keeps improving like he has the last couple of years, I think he could definitely be a low 90s guy and that will definitely help his success at the next level.”

Franklinton opens the regular season on Feb. 22 on the road against Albany.