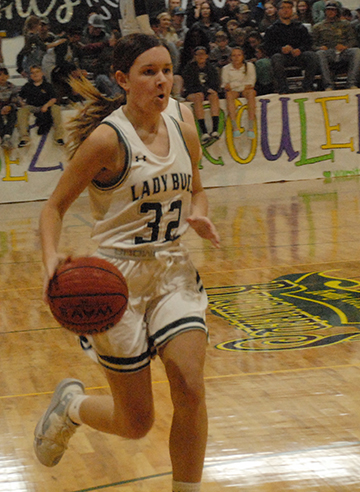 Bowling Green School’s Lady Buccaneers were defeated in three games that were held on Nov. 20, Monday and Tuesday.

Bowling Green came up short to Parklane Academy, 47-46, in a game held Friday on the road.

Bailey Devall led the team in scoring with 20 points that included a pair of 3-pointers and she grabbed six rebounds and made two steals.

Baileigh Crain recorded a point, two rebounds and she blocked a pair of shots.

Peyton Dupuy pulled down four boards and made a steal, while KaKa Seal tallied a rebound, Anna Claire Crowe had two rebounds, an assist and two steals.

Bowling Green played in the Brookhaven Academy Tournament that took place on Monday and Tuesday.

The Lady Buccaneers were defeated in Monday’s game, 63-49, by Centreville Academy.

Bailey Devall led the Lady Buccaneers in scoring with 19 points. Devall pulled down six rebounds, dished out an assist and made three steals.

Seal recorded seven points that included a 3-pointer, one rebounds, an assist, three steals and she blocked a shot.

Dupuy posted five points that included a 3-pointer, an assist and two steals.

Bridget Devall had five points, a rebound and an assist.

Crowe pulled down four rebounds and dished out an assist, while Crain blocked a shot.

On Tuesday, Bowling Green was defeated by Jackson Academy, 58-24.

Bailey Devall posted five points that included a 3-pointer to go with a rebound and two steals.

Seal had five points that included a 3-pointer, a rebound, an assist and a steal.

Crowe recorded three points and she blocked a shot.

Bridget Devall had two points and a rebound.

Bowling Green’s next game will take place on Dec. 1 against Ben’s Ford Christian School at home.