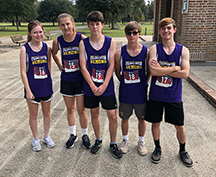 Franklinton’s Wesley Crain was the fifth best runner in the District 8-4A Cross Country Meet that took place on Nov. 5 at Fontainebleau State Park.

Crain ran the three-mile race in 20 minutes, 40.7 seconds. He was just 0.6 seconds from fourth place, which was Lakeshore’s Drew Gourgues, as 16 competitors ran the event.

Two more runners competed for the Demons in Kael Boyle and D.J. Corkern.

McGuay topped the event by 16 seconds over Salmen’s Ethan Ruiz.

Lakeshore’s Elijah Entrekin was third at 20:21, followed by Gourgues and Crain to round out the top five.

The top five runners were from St. Scholastica Academy.

Chloe Chehardy won the event in 21:43 by 12 seconds over Maggie Oggs.

Claire Berrigan and Presley Lang were fourth and fifth with times of 22:16 and 22:54 respectively with 22 competing.

St. Scholastica Academy won the team part of the race.

Everybody qualifies for the state meet.

The Class 4A state meet will take place Tuesday at Northwestern State University in Natchitoches.