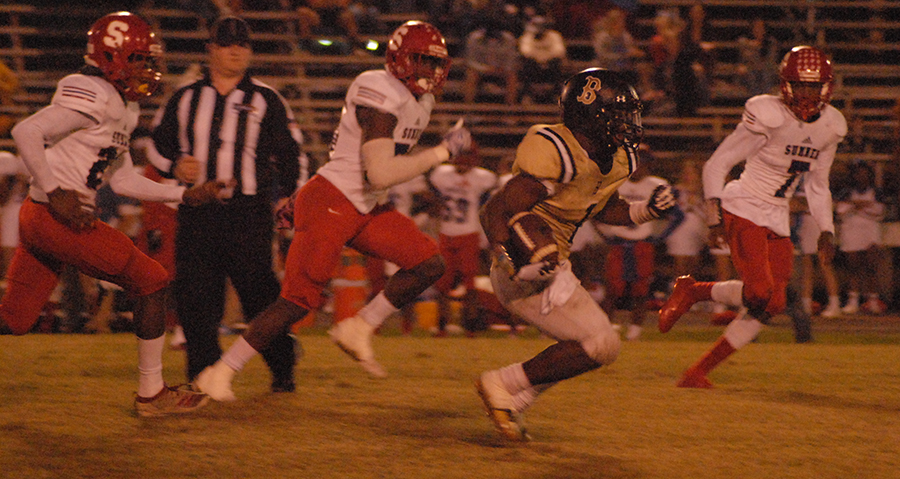 Bogalusa’s Lumberjacks came up a point short to Jewel Sumner, 7-6, in a District 8-3A game Friday on Senior Night at Lewis V. Murray Jr. Stadium.

“I told our kids coming into tonight that I thought us and them were very, very similar to each other and the team that made the least amount of mistakes would win the ballgame,” Bogalusa coach Adam Brumfield said. “I think we made more mistakes than they did, we put the ball on the ground too many times, we dropped a few balls, and our pass protection should’ve been better. Hopefully we’ll get this cleaned up and do a better job next week.”

Jewel Sumner scored the game’s first points at the end of the first quarter.

The Cowboys took over at Bogalusa’s 34-yard line after a fumble recovery with 46 seconds left. After a 4-yard run, moving the ball to the 30, Laquantion Bickham connected with Brennan Self on a touchdown pass on the final play of the quarter to make it 7-0 after the extra point.

Bogalusa pulled within one point late in the first half when Ashton Levi completed a 24-yard touchdown pass to Raheem Roberts. The extra point was blocked, keeping it 7-6 with 1:59 on the clock.

The defenses took over after that, as both teams were held out of the red zone.

Bogalusa had one final chance late in the game.

The Lumberjacks took over at their own 5 with 2:21 remaining in the fourth quarter, but fumbled with 43 seconds left. Jewel Sumner converted a first down that allowed the Cowboys to run out the clock, ending the game in a 7-6 final.

Bogalusa dropped to 2-3 overall and 0-3 in district. Jewel Sumner improved to 6-1 overall and 3-1 in league play.