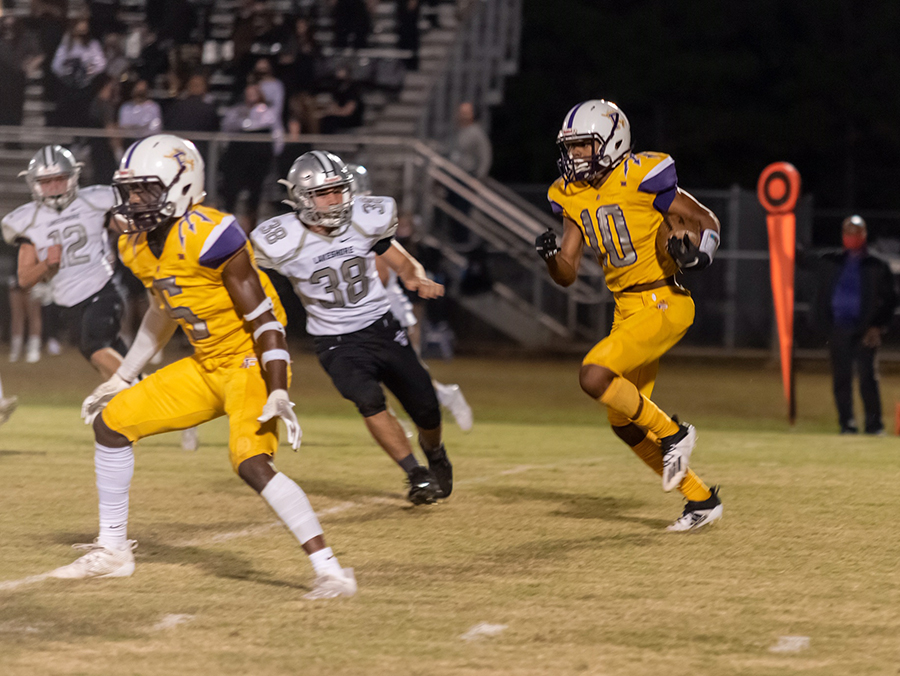 In their 2020 district opening game, the Franklinton High School Demons hosted the Lakeshore High Titans on Friday in a matchup that ended in a 52-0 loss for the Demons.

Franklinton went into the game after a loss to St. Charles Catholic in their previous game. Lakeshore had suffered a similar loss to Westgate High School.

The first quarter saw the Titans put three touchdowns on the board against a hard-pressed Demons’ defense. In the first possession of the game, the Titans made a seven-play drive downfield, ending in their first touchdown with a pass from quarterback Sam Willie to B.J. Foster from the Demons’ 7-yard-line. Megan Gettys missed the extra point and the score was 6-0 just a minute and a half into the game.

Two minutes later, Willie passed to Colby Ziegler from within the 10 for the Titans’ second touchdown. Willie made the two-point conversion and the score went to 14-0. With two and a half minutes left in the quarter, Willie passed to Josh Ray from the Franklinton 42. Ray caught it and pushed through for the touchdown. Gettys’ kick was good and the score went to 21-0 at the end of the first quarter.

The second quarter opened with the Titans back in possession and a short step from another touchdown. Willie passed to Rhett Kimble from the Demons’ 36 on a fourth down. Kimble caught it and ran it back to put the Titans on the board again. Gettys’ kick was good for the extra point and the score was 28-0 two minutes into the second quarter. Four minutes later it looked like the Titans were building toward another drive, but a pass from Willie was intercepted by Franklinton’s Christiun Martin. However, the Titans’ defense forced the Demons to punt before they could score.

The Titans put another touchdown on the board with three minutes left. At the 3-yard-line, Willie kept the ball and pushed through the center of the Demons’ defense. Gettys’ kick went through again and the score moved to 35-0. The Titans got on the board once more before the halftime buzzer. With 15 seconds left, Zach Dollar kicked a field goal from the Franklinton 18. It was good, and the score moved to 38-0 after one half of play.

The Titans put their last two touchdowns on the board in the third quarter. The first, four minutes in, was on a handoff from Willie to Ray from the Franklinton 3. Ray broke through up the right side for the touchdown, Gettys was good with the kick and the score went to 45-0. At the end of the third quarter, Willie handed off to Foster from the Franklinton 10-yard-line. Foster ran it up the middle for the last touchdown of the game. Gettys’ kick was good and set the final score at 52-0.

Next week, Franklinton travels to Slidell to take on Salmen High School in the second district game of the season.