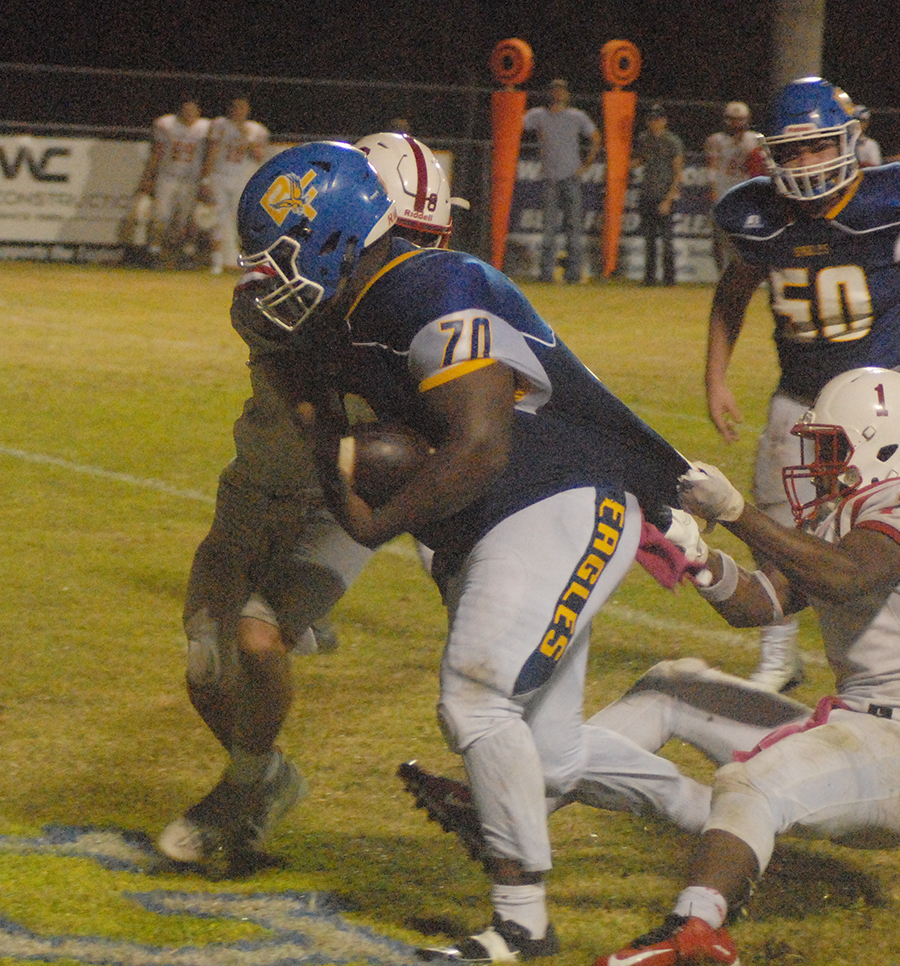 Ben’s Ford Christian School had its historic season come to an end Friday in a 60-34 loss to Humphreys Academy in the second round of the Class 2A playoffs, in the Eagles’ first ever postseason home football game.

The Eagles struggled against Humphreys’ offense, in particular the running game that was led by Nehemiah Coalson, who ran for 303 yards and five touchdowns.

“We were sloppy, they had a good running back, we didn’t tackle well,” Ben’s Ford Christian School coach Destin Pittman said. “The boys showed heart. Came out, we played tough. Second half, I feel like we played better offensively.”

This year, Ben’s Ford went 7-2 in the regular season.

In addition to hosting its first ever postseason game in the football program’s history, the Eagles also won their first ever district title.

“Great group of kids,” Pittman said. “Five seniors were the core of the team. Young guys got big shoes to fill. We’re looking for some new leaders for next year. We enjoyed the moment. Great season. A lot of firsts for the school and we’re looking to improve. We’re trying to build a program here.”

Ben’s Ford got off to a great start.

The Eagles won the toss and elected to receive. On the first play from scrimmage, Sam Peters connected with Alston Moore, who made a one-handed catch across the middle. Moore then did the rest on a 55-yard score to make it 6-0 after the two-point conversion was no good just 12 seconds into the game. Peters threw for 137 yards and three touchdowns, all to Moore. Moore also ran for 75 yards.

Seige Rowland passed to Brett Hughes for a 26-yarder for the first score. Parker Bell ran in the two-point conversion for Humphreys’ first lead at 8-6.

Coalson tallied on a 12-yard run with 10 seconds left in the first quarter with Bell converting the two.

Coalson completed the next touchdown drive with a 6-yard run. The conversion was no good, capping off a 12-play, 79-yard drive that took 5:43 off the clock made it 22-6 with 3:22 left in the second quarter.

On a later drive, Ben’s Ford’s Myron Weary scored on a 4-yard run that was set up by Moore’s runs of 29 and 27 on consecutive plays. Moore threw to Daniel Martin for two, trimming the lead to one possession at 22-14 with 2:49 left in the first half.

But Humphreys scored two more touchdowns to close out the second quarter.

Coalson added another score on the first drive of the third quarter to make it 42-14 after the two-pointer was no good. Rowland then later intercepted a pass and took it 50 yards for a touchdown. The conversion was no good and Humphreys led 48-14 with 6:42 left in the third quarter.

Ben’s Ford got back on the board when Peters and Moore connected on a 34-yard touchdown hook up to make it 48-20 after the two-point attempt was no good with 4:44 left in the third.

It stayed that way until the fourth quarter, when Coalson scored on a 71-yard run to make it 54-20 with 9:26 left in the fourth period.

Peters and Moore connected for one more touchdown, this one for 64 yards. The conversion was no good.

Each team scored one more touchdown.

Hughes caught a 47-yard pass from Bell for Humphreys with 7:29 left and Martin ran a score in from 23 yards out for the Eagles. Humphreys’ conversion was no good, but Weary ran in the Eagles’ attempt, on the way to the 60-34 final.

Humphreys advances to the third round of the playoffs.