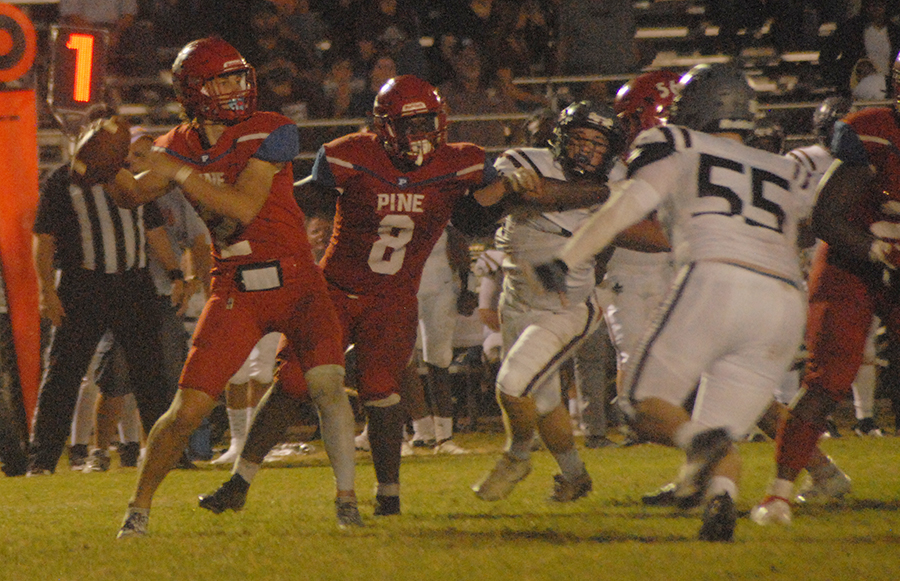 DAILY NEWS PHOTO/Chris Kinkaid Pine’s Brandon Sprehe prepares to throw a pass in a game this season. Sprehe threw for 50 yards and ran for 40 yards and a touchdown in Friday’s game.

Pine’s Raiders defeated Independence, 40-15, in a District 9-2A contest held Friday on the road.

“I thought it was an overall team win. We had over 400 yards offense and held them to 150,” Pine coach Bradley Seal said.

Niki Lee led the team in rushing with 106 yards and two touchdowns.

Adrianuen Johnson tallied 82 yards on the ground with two touchdowns.

Audrelique Dural ran for 70 yards and a score. He also led the team in tackles defensively with 11.

Brandon Sprehe threw for 50 yards and ran for 40 with a touchdown.

Pine’s next game will take place on Friday against Kentwood on the road in a district match up.

“Kentwood is a really good team and a really good program, so anytime you play them, it’s a big game, so we’ll need a good week of practice and to play a good game to win,” Seal said.

Kentwood is 3-2 this season after defeating Varnado, 47-16, last week.

Kentwood is among those also receiving votes outside of the top 10 in the Louisiana Sports Writers Association Class 2A poll.

Pine will have two regular season games after this week.

Both are at home and are against Amite and Varnado on Nov. 13 and Nov. 20.