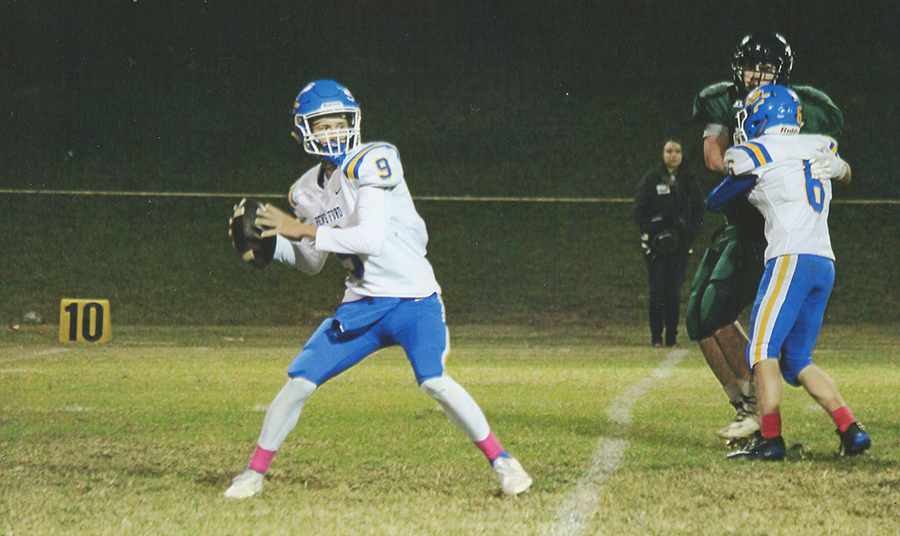 COURTESY PHOTO/Karen Holston Ben’s Ford Christian School’s Sam Peters looks for a receiver with Trey Hartzog (6) blocking in a game this season. The Eagles host a football playoff game for the first time in the program’s history on Friday against Humphreys Academy.

For the first time in its football program’s history, Ben’s Ford Christian School is hosting a playoff game.

“I think it’s going to be a huge game Friday,” Ben’s Ford Christian School coach Destin Pittman said. “It’s the first ever home playoff game. I’m not sure if the kids realize how big this really is because they’ve never been here before. We’re playing a really good opponent in Humphreys Academy. Offensively, I think we’ll be able to score. We’ve been able to score all year, but it’s going to come down to stops on defense.”

Pittman talked about his excitement for his team being able to host the contest.

“It’s pretty cool because we’re getting to write history,” Pittman said. “For most schools, first time hosting a playoff game was a long time ago. For us, it’s now. We’re writing history. These kids will be talking about this game for years to come, so hopefully, this will make them play harder just because they know they get to write history. I expect a big crowd.”

The Class 2A action gets started on Friday at 7 p.m. with the fourth-seeded Eagles going against fifth-seeded Humphreys Academy.

This is the Eagles’ first game since Oct. 16, which was a 74-30 victory over Kemper Academy.

Ben’s Ford had a scheduled bye week in the final week of the regular season and then had a bye in the opening week of the playoffs for winning the District 2A2 title.

It was the Eagles’ first league title in the football program’s history.

Alston Moore has had a great season for the Eagles.

Moore has 41 total touchdowns this season with a pick-six along with a kickoff and punt return for a touchdown each.

Sam Peters has thrown for 1,281 yards on 40-of-73 with 17 touchdowns and just two interceptions. Peters also has forced a fumble on defense.

Daniel Martin enters with 293 yards rushing with 11 touchdowns to go with 129 yards passing with a touchdown and 248 receiving yards on 12 catches and three scores.

Defensively, Martin leads the team in tackles with 83.5 along with 14 for loss and six pass breakups. Martin also has forced a fumble and recovered two.

Trey Hartzog has 239 rushing yards and six touchdowns along with five catches for 123 yards.

Gage Adams has one carry for 79 yards and enters with three fumble recoveries on defense.

John Glover begins the week with 51.5 stops, 15 for loss with two pass breakups, a team-leading four forced fumbles and he is tied for the team leadership with Martin Mizell with four fumble recoveries. Mizell has one forced fumble.

Jonah Holston is the team leader in interceptions with five picks and he returned one for a score. He has also forced a fumble

Caleb Matthews has picked off one pass.

Continuing with the turnovers, Brantley Dyess has three forced fumbles and two recoveries.

Alex Stogner has a forced fumble.

Tucker Pittman begins with a forced fumble and a fumble recovery.

The winner of Friday’s game goes against either top-seeded Manchester Academy (10-0) or ninth-seeded Sharkey Issaquena Academy (4-6). Manchester is the defending state champion.