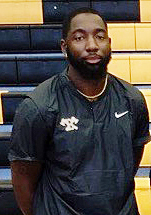 “The city of Bogalusa will always have a special place in my heart because it made me the man I am today,” Williams said. “I moved here from New Orleans when I was 14 and it changed my life for the better. So, it’s a dream come true to come back where I earned a name for myself as a basketball player and now to be the head basketball coach, I am truly grateful for this opportunity. I came back to be an inspiration to the up-and-coming generation and to let them know that you can be whatever you want to be and get away from here. My main goal is to get kids to college, no matter if it’s for sports or not. If I can get kids off to school, then I’ve done my job. I’m very honored to be back and be a part of a great tradition that Coach Martin has started here. My goal is breaking his records. He has been a great mentor for me during this process and I know anything I need I can call on him. I believe me being such a young coach, I can relate to the players and understand what they are going through.”

Coach Martin is Ken Martin, who was Bogalusa head basketball coach from the 1994-95 season through 2014. He was also the school’s athletic director from 2014 until 2016.

Williams, who is 27 and is a 2013 Bogalusa High School graduate, said his ultimate goal is to help the Lumberjacks win a state championship.

He played basketball and football for the Lumberjacks.

In basketball, Williams played several different positions and was a four-year starter. Williams  was a first-team all-district player all four years, District Most Valuable Player his sophomore season and he was an honorable-mention all-state player his sophomore year.

In football, Williams started at receiver and moved to quarterback.

After graduating from Bogalusa High School, Williams went to the University of Louisiana at Monroe and graduated with two degrees. He has a Bachelor of Science in Kinesiology and he has a Master’s Degree in Criminal Justice.

Williams was a graduate assistant working with the quarterbacks at Northwestern State University in Natchitoches for two seasons.

Besides being the basketball coach, Williams is also Bogalusa’s quarterbacks coach.

In the classroom, Williams teaches Civics and World History.

Williams said everything has been great.

“I’ve got a great couple of seniors that I think will be great for us that I’m excited about,” Williams said.

Bogalusa will play in the Hammond Jamboree on Nov. 12 and the Lumberjacks will start the regular season in the Lakeshore Tournament that will take place Nov. 23-25.