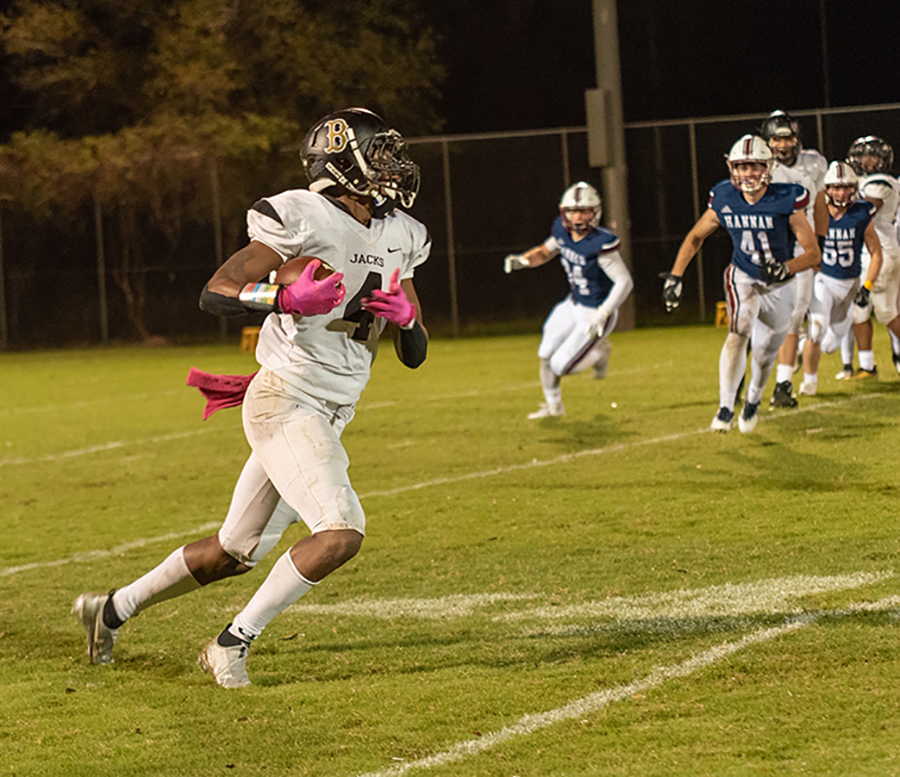 The Lumberjacks were hard pressed by the Hawks from the start.  The Hawks scored first with 5 minutes left in the first quarter. Quarterback Cory Robinson pushed through with the keep from the 6 yard line. Kicker James Pham made the extra point and put the score 7- 0. The Lumberjacks answered back in their next play. Quarterback Ashton Levi passed to Tajdryn Forbes at the Bogalusa 16 yard line. Forbes broke through the Hawks’ defensive line and ran back 84 yards for the touchdown. Levi attempted the 2 point conversion with a quarterback keep but couldn’t break through the line, and the score became 7-6. Before the end of the first, the Hawks put another touchdown on the board after a five play drive down field when Robinson broke through on the left side from the 3 yard line. Pham’s extra point kick was good and the score at the end of the first was 14-6.

The Hawks’ kept up the pressure on the Lumberjack in the second quarter with a ten play drive which ended with Robinson handing off to Jake Dalmado at the 3 yard line for the touchdown. Pham was again good for extra point and the score went to 21-6.  The Lumberjack couldn’t rally a response and the Hawks regained possession.  With forty second left in the half,  Robinson put another touchdown on the board with a keep from the 8 yard line. Pham’s kick was good and the score at the half was 28-6.

The Lumberjack received the kick at the start of the second and made good use of it. An eight play drive ended ended with Levi and the quarter back keep from the 6 yard line and pushing through the the center for the touchdown.  The Lumberjacks attempted the conversion again but failed and the score went to 28-12.  The lumberjack put another touchdown on the board after forcing the Hawks to punt. Levi passed to Raheem Roberts for their own 41 years line.  Roberts broke right and ran it back for 50 yards and the touchdown. A handoff from Levi to Talik Williams  succeeded with the conversion and the score went to 28-20 at the end of the third quarter.

The Hawks answered back with three more touchdowns. The first with a hand off from Robinson to Dalmado from the 5 yard line which put the score at 35-20 after the extra point.  Two minutes late, Robinson handed off to Dalmado again at the 36 yard line for the touchdown and extra point, which put the score at 42-20.  A minuted later, Robinson handed off Wyatt Coffee from the 9 yard line.  With the extra, the score moved to 49-20.  THe lumberjack made a final drive down field. From the 1 yard line, Levi passed to Roberts for the last touchdown of the game.  Levi kept for the 2 point conversion and broke through setting the final score at 49-28.