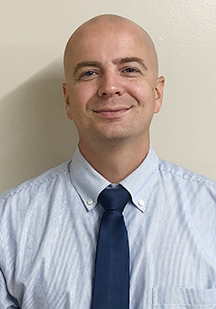 “I’m just excited to build a program again,” Dantin said. “Our school’s mission is to point kids to Christ and we are going to do that through our basketball program. We’re not going to build this overnight, it’s going to take a couple of years. It’s about getting better everyday. I just focus on being better everyday. I take it day-by-day, practice-by-practice, game-by-game and build it like that.”

Dantin, who has been the assistant girls basketball coach for the last four years under Mark McGehee, coached the boys team from 2004 through 2008.

“We’ve got a process that we know how to implement and believe in,” Dantin said.

Dantin said that the key to them having success is buying in.

“The players will have to buy into our system and what we do,” Dantin said. “If they do, we’ll have more success. It’s more than wins and losses. It’s about relationships and building lifelong relationships. I’ve still got players that call me from previous years.”

Dantin, who is the pastor at Oak Grove Baptist Church in Franklinton, has been Ben’s Ford Christian School’s athletic director since April of 2018.

Dantin will continue in all of his roles at the school and church and McGehee will be an assistant coach for the boys basketball team.

“Me and Bro. Mark are a team,” Dantin said. “We’re like a hand and a glove. We see the game the same way. Oftentimes, we think what the other one is thinking before anything is said. We’re on the same page in everything that we’re doing as far as basketball is concerned.”

Ben’s Ford’s boys team will open the season on Nov. 2 with a road game against Discovery Christian.