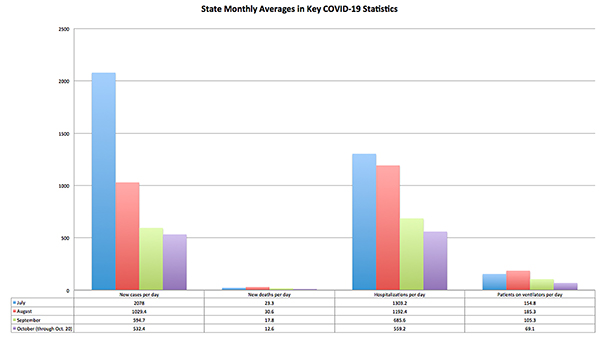 The state of Louisiana has seen most of its COVID-19 pandemic-related statistics fall to near historic lows in October, according to information from the Louisiana Department of Public Health.

The averages of daily hospitalizations and the number of patients on ventilators have also taken significant drops in October.

The drops in October’s averages compared to September occurred even as the amount of testing remained relatively static. This month, the state is averaging 14,809.5 tests per day, compared to 14,813 per day in September.

This month is also the first where the state has been entirely in “Phase Three” of its re-opening, when lockdown and other preventative measures have been at their least strict. Phase Three initially went into effect on Sept. 11, and the measures currently in place will remain until at least Nov. 6.

Washington Parish has reported 1,725 cases and 70 deaths since the start of the pandemic.