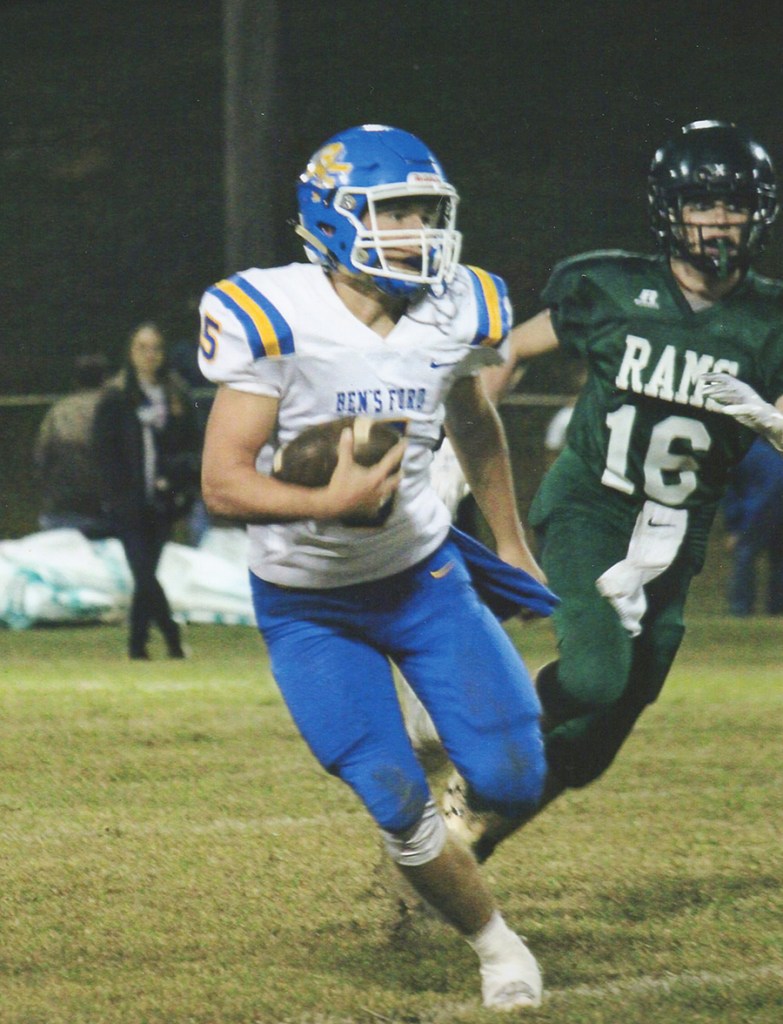 Ben’s Ford Christian School scored more than half a 100 in the second half of Friday’s game and Alston Moore capped off his stellar regular season with a monster game in a 74-30 victory over Kemper Academy in a District 2A2 contest.
The Eagles led Kemper, 22-14, at halftime and opened the lead in the third quarter to 52-30 as the teams headed to the fourth period.
“We started off really sloppy,” Ben’s Ford coach Destin Pittman said. “We didn’t play great defense at the beginning of the night. We struggled tackling. In the second half, we started kind of putting it together offensively and defensively and playing better.”
Moore capped off his incredible regular season by rushing for 337 yards on 17 carries and five touchdowns. He also caught three passes for 142 yards and a touchdown.
Moore finishes the regular season with 1,739 yards rushing on 96 carries (18.1 per attempt) with 24 touchdowns. He also caught 24 passes for 911 yards and 14 more touchdowns. Moore scored 41 total touchdowns this season. Moore also had an interception return for a score, a kickoff return for a score and punt return for a touchdown.
Sam Peters threw for 251 yards and a touchdown.
Peters threw for 1,281 yards with 17 touchdowns and just two interceptions.
Daniel Martin posted 74 yards on five carries (14.8) with two touchdowns. Martin also caught five passes for 98 yards (19.6) and a score. Defensively, Martin led the team with seven tackles, four solos, two for a loss and he intercepted a pass.
Martin caps off the regular season with 293 yards rushing and 11 touchdowns. He had 12 catches for 248 yards and three scores. Martin threw for 129 yards and a score.
Defensively, Martin made 83.5 stops, 60 solos, 14 for loss, six pass breakups, a half a sack, he intercepted three passes, forced a fumble and recovered two
Jonah Holston made one reception for 48 yards.
Myron Weary had one catch for 24 yards and he rushed for 14 yards.
Trey Hartzog posted a catch for 11 yards and he ran for 18 yards.
The Eagles’ offense put up 765 yards of total offense.
Defensively, the unit forced four turnovers.
John Glover made 5.5 stops, five solos with one for loss. He had 51.5 stops, 39 solos, 15 for loss, two pass breakups, four forced fumbles and four recovered fumbles.
Gage Adams tallied 4.5 stops, three solos and he intercepted a pass.
Jonah Holston had three tackles, two solos, one for a loss and he picked off a pair of passes.
James Blackwell recorded three tackles, one solo, a sack and 1.5 stops for loss.
Caleb Matthews, Brantley Dyess and Jonah Williams all had three stops and two solos.
Ben’s Ford is off the next two weeks.
This week is the final week of the regular season, which is a bye for the Eagles.
Ben’s Ford won the District 2A2 title, so they get the first week of the playoffs off as well.
“I think it’s going to be really vital to us having these two bye weeks, getting every body healthy,” Pittman said. “We’ve got guys who are banged up. We’re taking this week off from all football activities and we’re practicing like normal next week. This week is a good week to let them clear their minds.”
Ben’s Ford is 7-2 this season.
Currently, Ben’s Ford is either second or third in powerpoints, depending on which team wins one of the other districts.