Eagles soar to District 2A2 Championship 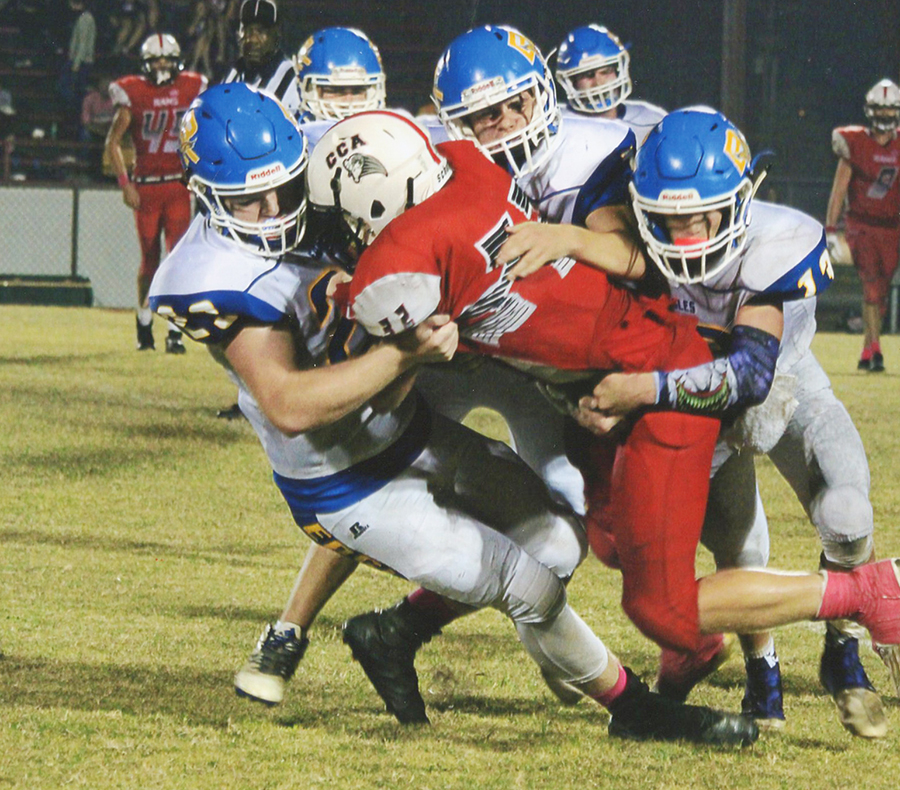 COURTESY PHOTO/Karen Holston Several Ben’s Ford Christain School players combine on a tackle of a ball carrier in Thursday’s game. The Eagles have won the District 2A Championship.

Ben’s Ford Christian School’s Eagles soared to the District 2A2 title with a 48-22 victory over Columbus Academy in Thursday’s road game.

In Friday’s contest, two players ran for more than 100 yards, as the Eagles amassed 512 yards of total offense.

Alston Moore led the way, continuing his stellar season with 259 yards on just 12 carries and three touchdowns for an average of 21.6 yards per attempt. He also hit the century mark in receiving with two catches for 103 yards and a pair of scores.

Trey Hartzog ran for 105 yards on just three carries and two touchdowns. That is an average of 35 yards per carry.

Sam Peters threw for 156 yards on 3-of-5 passing with two touchdowns and no interceptions.

Daniel Martin led the defense with 17 tackles with 12 solos, four a loss and he intercepted a pass and recovered a fumble.

Brantley Dyess recorded 5.5 stops with half a stop for loss. He also forced a fumble and recovered a fumble.

Caleb Matthews was at five tackles, four solos and one for a loss.

Myron Weary, who made a half a tackle, also forced a fumble.

The tiebreaker is head-to-head and the Eagles have the tiebreaker on both teams, so they are the champion no matter how they do this week.

The district winners are guaranteed a top-four seed in the playoffs that is determined by powerpoints. League champions also get a bye through the first round.

Currently, Ben’s Ford is No. 3 in the power points.

The Eagles will be back on the field on Friday with a road game against Kemper Academy.

The Eagles have a bye for next week, which is week 10. The playoffs begin on Oct. 30, which is Ben’s Ford’s bye week in the first round of postseason.