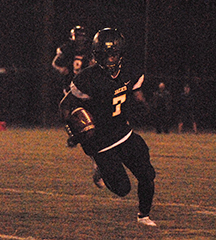 “This week is homecoming week so obviously you have to deal with a lot of distractions,” Bogalusa coach Adam Brumfield said. “We want to keep the focus and intensity and not have a let down after a big win. Last year after the FHS win, we came out flat and lost to a team that we should’ve beat. We can’t let this happen again. This week is a chance to get another win against a (Class) 4A team so that equals a lot of power points. With Josh (Taylor) getting injured we have to get our freshman quarterback Ashton Levi ready. I have a lot of faith in Ashton. He throws a good ball and he’s just still learning what we do, but I know he’s up to the challenge.”

Taylor ran three times for 39 yards last week and he threw for 85 yards and a touchdown.

Tajdryn Forbes rushed for 46 yards and two touchdowns on seven carries. He also had one catch for 13 yards.

Jarvis Dawson threw for 12 yards and ran for 6.

Defensively, Keshawn Manning posted seven tackles and a sack. He also intercepted a pass and returned it for a touchdown.

Javon Morris made four stops with an assist and a sack.

Dawson had a tackle and three sacks.

Williams had two tackles and a sack.

Desmond Johnson posted a tackle and a sack.

Derek Keating and Marquel Oatis put up a tackle and a half of a sack each.

Ben Franklinton enters this week after being defeated in its opener by Haynes Academy, 52-0.

These two teams did not play against each other last season.

After Friday’s game, Bogalusa will be at home against Varnado on Oct. 16.