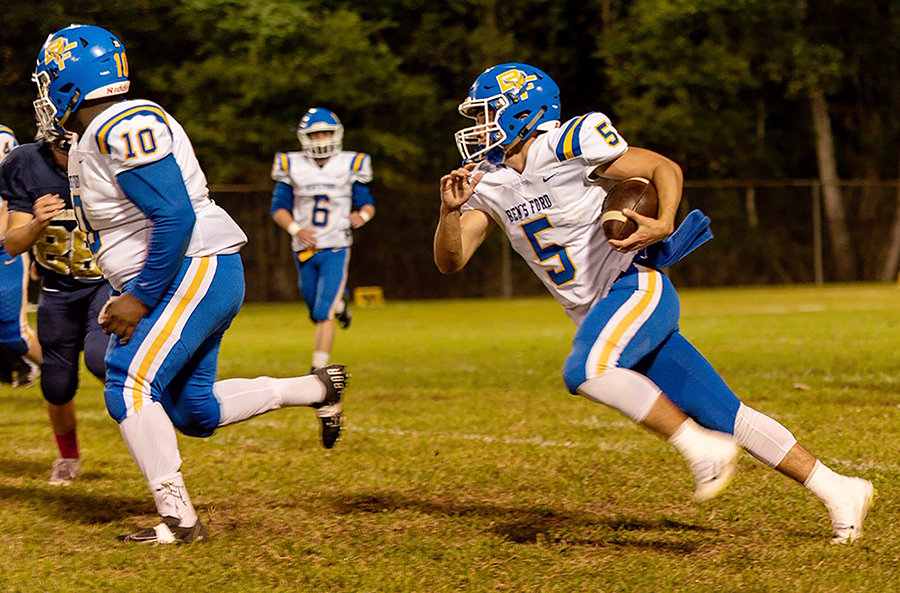 Ben’s Ford Christian School takes to the road on Thursday, Oct. 8 to play a key District 2A2 matchup against Columbus Academy at 7 p.m.

The Eagles enter this week with a 5-2 overall record and a 1-0 mark in district play.

A win this week puts the Eagles in the driver’s seat for the district title, as Columbus Academy is the only other team in the district without a loss in league play.

“It’s a big game,” Ben’s Ford Christian School coach Destin Pittman said. “This really impacts whether we win district or not. We’re the best two teams in the district. It’s a game I feel like will be a battle, but with our depth and senior leadership, I feel like that’ll be the difference.”

Last season, Ben’s Ford went 1-7, but has turned things around this year.

Pittman credited players and coaches for this year.

“I think it’s the summer commitment and the kids trusting the process of what we’re trying to do around here,” Pittman said. “I also believe that having multiple other coaches is something that has impacted it, instead of just one or two trying to do everything.”

In last week’s game, Alston Moore broke the 1,000-yard rushing mark after running for 209 yards and two touchdowns on 11 carries. Moore has run for 1,143 yards this season. Moore also caught four passes for 99 yards and a score in Friday’s contest.

Sam Peters threw for 142 yards and a touchdown on 5-of-9 passing.

Myron Weary ran for 53 yards on his only carry.

Trey Hartzog had 32 yards rushing on six attempts and a touchdown.

Daniel Martin caught one pass for 43 yards and a score. He also ran for 5 yards and two touchdowns.

Defensively, Martin led the team in tackles with 10.5, as six were solo and he made a 1.5 for loss.

John Glover tallied six stops, three solo, two behind the line and he recovered a fumble.

Caleb Matthews had four stops, two solos with 1.5 for loss and a half a sack.

Brantley Dyess had 3.5 tackles, one solo with a half a sack and 1.5 stops behind the line.

Alex Stogner posted 3.5 stops, one solo, a half a sack, one tackle for loss and he forced a fumble.

Moore tallied three stops, two solos, a half a sack and 1.5 stops for behind the line.

Myron Weary had a half a stop for loss.

Gage Adams intercepted a pass and recovered a fumble.

Columbus is 1-6 overall this year and 1-0 in league play.

Ben’s Ford was defeated in this matchup last season, 48-12.

After this game, Ben’s Ford has one regular season game left when they play against Kemper on the road Oct. 16 in a district contest.