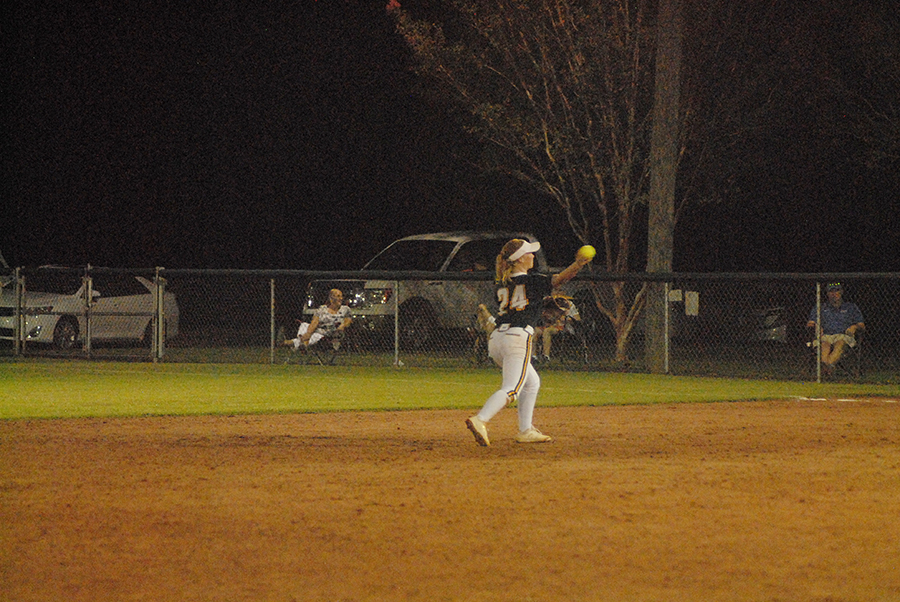 DAILY NEWS PHOTO/Chris Kinkaid Bowling Green School’s Brylie Fowler throws to first in a game this season. The Lady Buccaneers were second in the South State Tournament and play their first game of the Class 3A Tournament on Saturday, Oct. 3.

Bowling Green School came in second place at the South Class 3A Fast-Pitch Tournament that took place last Saturday and Monday at Traceway Park in Clinton, Miss.
The Lady Buccaneers opened the competition with a 15-0 victory over Canton Academy in three innings.

Bowling Green scored three runs in the first inning and followed that up with six each in the second and third.

Brylie Fowler had a hit and tallied two runs.

Olivia Serigne pitched the third inning and allowed a hit.

Bowling Green topped Tri-County Academy, 2-1, in the next game.

The Lady Buccaneers scored two runs in the third and Tri-County posted a run in the fifth.

Albanie Fussell drove in both runs on a single that plated Katherine Burris and Dupont.

Dupont recorded two hits, while Albanie Fussell and Burris had one each.

Aleigha Fussell pitched a complete game, allowing one run on six hits with two strikeouts and one walk.

That capped off Saturday’s play.

The first was a 6-0 loss to Clinton Christian Academy in the double-elimination tournament.

Bowling Green had two hits, one each by Spears and Albanie Fussell.

The Lady Buccaneers rebounded from the setback with a 6-2 win over Columbia Academy.

Camaille singled, doubled and drove in a run.

Spears singled, drove in two runs and posted an RBI.

Fussell went four innings, allowing two runs that were both unearned on two hits with three strikeouts and a walk.

The Lady Buccaneers scored single runs in the second through fourth innings and another in the sixth.

Clinton tallied both of its runs in the bottom of the sixth.

Dupont homered scored two runs and drove in a pair of runs.

Spears had a pair of hits.

Kylee Burris singled, scored a run and had an RBI.

That put the Lady Buccaneers in the championship game, but they were topped by Clinton Christian Academy, 6-3.

Camaille singled, drove in a run and scored a run.

Albanie Fussell tallied a hit and an RBI.

Dupont and Hallie Serigne scored a run each.

The top four teams advanced to the Class 3A Fast-Pitch Tournament that will take place on Oct. 3 and 5 at the Magee Sportsplex in Magee, Miss.

Bowling Green will open the double-elimination tournament on Saturday, Oct. 3 against Winona Christian School at 1 p.m.

The winner will play either Marshall Academy or Canton Academy.