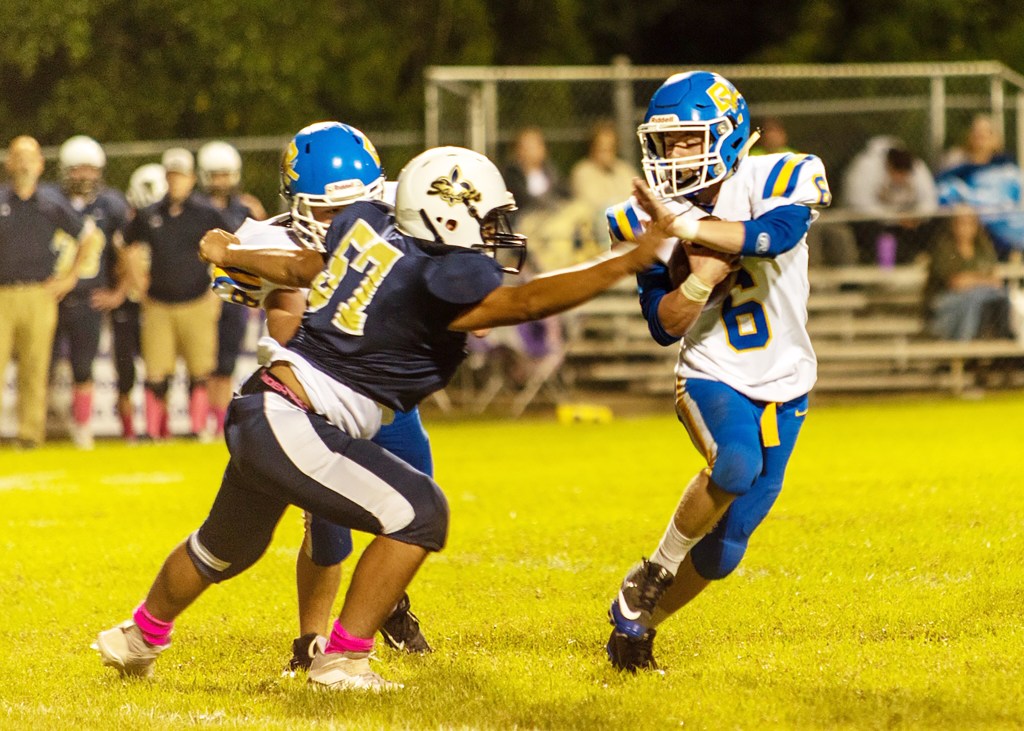 By John Glover, The Daily News

The Ben’s Ford Christian School Eagles hosted the Prentiss Christian Saints in their final home game of the 2020 season, winning 48-14. The Eagles went into the game with a 4-2 season record, coming off a 66-12 victory over Christian Collegiate Academy the previous week.

Alston Moore had a particularly good night. In the second play of the second quarter, Moore surpassed the 1,000 rushing yards mark for the season.

The Eagles got on the board first. With about a minute and a half left in the first quarter, Daniel Martin finished off an 11-play drive with an 8-yard quarterback keeper for the touchdown. Following the two-point conversion, the first quarter finished with the Eagles winning 8-0.

Things heated up in the second quarter. The Saints’ Dylan Martin handed off to Demorion Thompson for a touchdown just 10 seconds in. The Saints attempted a conversion but couldn’t break through the Eagles defense.

Back in possession, Moore put the Eagles into scoring range with a 30-yard rush to the Saints’ 9. Daniel Martin, with the next carry, scored his second touchdown of the game.  The Eagles didn’t complete the conversion this time and the score became 14-6.

The Saints rallied an answer and pushed through a nine-play drive that ended with a pass from Dylan Martin to Brantley Breeland in the endzone. Martin successfully carried it in for the conversion and the score was tied at 14-14.

That would be the end of the scoring for Prentiss Christian, however.

Back in possession for the Eagles, Moore put down two rushing plays — the first a carry for 41 yards, and the second a 1-yard run for his first touchdown of the night. The Eagles attempted a conversion but were stopped and the score went to 20-14 at halftime.

The second half opened up with Moore putting a second touchdown on the board just 30 seconds in. Sam Peters passed the ball to Moore from the Eagles 38. Moore caught it at around the Saints’ 47 and ran it back for the touchdown. Peters passed to Myron Weary for the conversion, as he plowed through the Saints’ defense to make the score 28-14.

The Eagles kept the pressure on and put two more touchdowns on the board in the second quarter.

With two minutes left, Peters passed to Daniel Martin from the Saints 42. He caught it near the 30 and ran it back for the touchdown. The Eagles didn’t stick the conversion attempt, and the score moved to 34-14.

On the ensuing drive, Gage Adams intercepted Saints quarterback Bryon Anderson and put the Eagles back in possession. Three plays later, Peters passed to Trey Hartzog for a 21-yard touchdown. The Eagles didn’t make the conversion and the score was 40-14 at the end of the third quarter.

In the final touch down of the game, Eagles took possession after forcing the Saints to punt. The punt went hard left out of bounds at the Prentiss 16. Moore carried from the 16 and pushed through the Saints defense for the score. The Eagles successfully made the conversion with a carry by Hartzog, and the final score was 48-14.

“We started off very rough, playing down to our competition,” Ben’s Ford coach Destin Pittman said. “I think the important thing to take away is that we did win. We won for our seniors on senior night. We came out in the second half and we executed on defense and then executed on offense.”

The victory was nearly a mirror image of last year’s game, where Prentiss defeated Ben’s Ford by the score of 40-18. That Eagles team finished the year with a 1-7 record, but this year Ben’s Ford is already 5-2.

Ben’s Ford will go on the road against Columbus Christian Academy next Friday, and at Kemper Academy the week after.