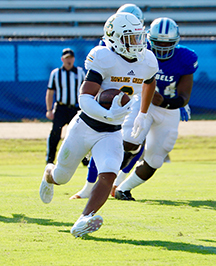 “We have gotten better week-in and week-out and that’s what we’re trying to do, get one week at a time,” Bowling Green School coach Riley Boudreaux said.

The Buccaneers are 3-1 this season.

Bowling Green will be back in action on Friday when they take on Wayne Academy in a District 4A3 game.

Wayne enters this week with a 3-2 record.

“They’re a good team,” Boudreaux said. “They’re 3-2 and they lost to two really good teams. The quarterback and running back are really good. Their defense is solid, so it’ll be a good game.”

Wayne’s other loss was to Cathedral Unit School, 34-14, in the opening week.

Following this game, Bowling Green will have a bye before resuming their season on Oct. 9 with a road game against Silliman Institute.