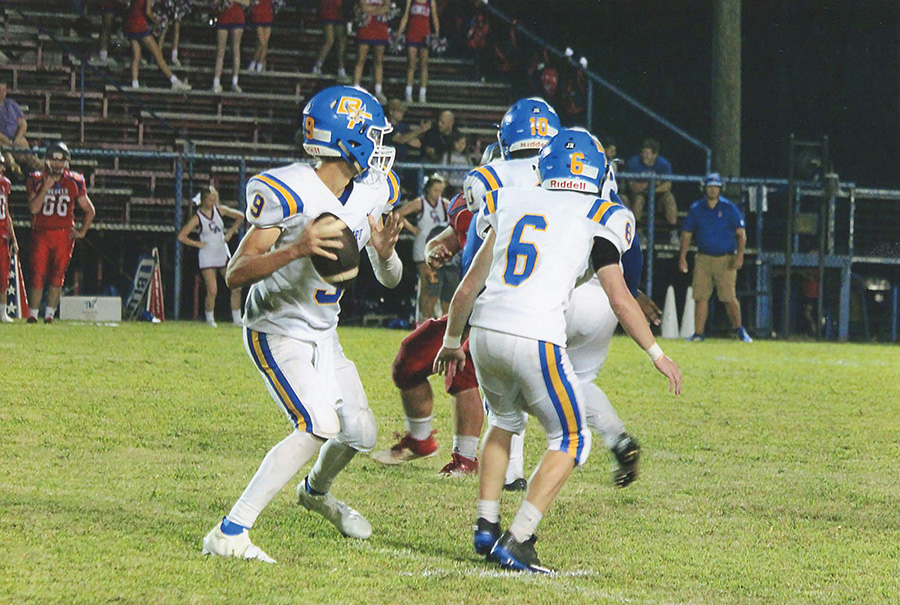 Ben’s Ford Christian School suffered a 50-40 loss to Claiborne Academy in a game where neither team led by double digits until the fourth quarter.

Both teams scored a touchdown and a 2-point conversion in the second quarter and the Eagles maintained a two-point lead, 26-24, at the break.

Claiborne opened the second-half scoring with a touchdown and 2-point conversion before the Eagles tied the game at 32-32. Claiborne scored once more in the third for a 38-32 lead through three.

Claiborne added to its lead in the fourth with a touchdown to go up 44-32 and added another to make it 50-32. Ben’s Ford tallied one more touchdown in the 50-40 contest.

“We came out and played well,” Ben’s Ford coach Destin PIttman said. “We were in the game all night. We had a bad snap that hurt us and we didn’t tackle well. Our offense kept us in the game, but we just couldn’t finish.”

Ben’s Ford Alston Moore had a huge game for the Eagles, accounting for more than 300 yards between rushing and receiving and five total touchdowns.

Sam Peters threw for 188 yards on 9-of-16 passing and three touchdowns and an interception.

Daniel Martin caught four passes for 39 yards and a score.

Martin led the defense with 13.5 tackles with 10 of them being solo stops and a half a tackle for loss.

John Glover made seven tackles, five solos and 1.5 behind the line.

Caleb Matthews was at five tackles with three of them solos.

Ben’s Ford is 3-2 this season and is back in action on Friday when play against Christian Collegiate Academy.

The Eagles entered last week fourth in Class 2A in the Impact Sports Coaches Pool.

This is the second time the teams have met, which was two weeks ago. Ben’s Ford won the first contest, 38-0.

“It’s tougher to beat somebody twice,” Pittman said. “I think it’ll be a good week for our boys to bounce back, work hard and try to get another win.”

Christian Collegiate Academy comes into this week with an 0-3 record. CCA had a bye last week, so their last contest was against Ben’s Ford.