Monday’s non-district game was a 13-3 win in six innings, but the game was much closer than that through 5-1/2 frames.

Bowling Green led 5-3 as the teams prepared to play the bottom of the sixth, but the Lady Bucs showed patience against a pair of relievers and recorded eight runs to get to the “mercy rule.’”

In the sixth inning, Bowling Green scored the eight runs on just one hit. There was an error and Bowling Green coaxed four walks and four players were hit by a pitch in an inning that had 12 hitters come to the plate.

Bowling Green coach David Hood Burris said that is what he wanted.

“Once it got out of control, I told them, anywhere close, just hit it. Let’s end it, so that’s what they did,” Burris said.

Landry Dupont began the inning with a walk. She stole second and advanced to third on a wild pitch before scoring on Anna Claire Crowe’s RBI groundout to make it 6-3. Cassidy Spears was hit, Dixie Camaille walked and Albanie Fussell was hit to load the bases. Kylee Burris recorded a run-scoring groundout to plate Spears for a four-run lead. Brylie Fowler was hit to reload the bases. Katherine Burris was hit to drive in a run and KaKa Seal drew an RBI walk, sending Camaille and courtesy runner Hallie Serigne to the plate to put the Lady Buccaneers up 9-3. The lineup turned over for Dupont, who walked, plating Fowler and it was 10-3. Crowe hit a liner to centerfield that was dropped and allowed Katherine Burris and Seal to score and make it 12-3. Spears lined a pitch to right centerfield, sending Dupont home to force the “mercy rule” at 13-3.

Monday’s game was close throughout until Bowling Green’s big inning.

The Lady Buccaneers got off to a solid start.

Pitcher Aleigha Fussell, who was solid throughout, held Jackson Prep scoreless in the first and Dupont wasted no time putting the Lady Bucs in the lead. Dupont took the first pitch she saw and belted it deep and gone just to the leftfield side of straightaway centerfield for the game’s opening run.

Spears doubled two batters later, bringing up Camaille. Camaille played longball as well, taking a pitch deep and out to left centerfield for a 3-0 lead.

“I liked that we came out aggressive and hit the ball like that,” coach Burris said. “I mean, I’ve been waiting on that all year in the first inning from this group and we finally did it. I wish we could get a little more focus in those middle innings and add a run or two every inning, but I can be happy with a win against a 5A, good solid program.”

Jackson Prep came back and tied the game in the third inning.

Kaylee Conroy singled to begin the frame. Kamiya Dillon singled on a ball that deflected off the pitcher’s glove. Sydney Ray reached on an error that sent Conroy home, trimming the lead to 3-1. A throwing error on a pickoff at third from the catcher allowed Dillon to score. Jackson Prep tied the game later in the inning on Taylor Caton’s sacrifice fly that scored Ray.

Bowling Green countered in the bottom of the third to retake the lead and added another run in the fourth.

Camaille walked with one out in the third and later scored on Fowler’s RBI double for a 4-3 lead.

Bowling Green made it a two-run game in the fourth when Seal was hit and later tallied on Camaille’s run-scoring single.

It stayed a 5-3 game until the big sixth inning.

Crowe and Kylee Burris each recorded a run batted in.

Spears doubled, drove in a run and scored two runs.

Fowler doubled, had an RBI and scored a run.

Katherine Burris posted a run batted in and a run scored.

Seal drove in a run and scored two runs.

For Jackson Prep, Dillon Ray and Conroy all singled and scored a run.

Caton singled and tallied an RBI.

In Tuesday’s game, Albanie Fussell broke a 5-5 tie with a walkoff hit in the ninth inning for a 6-5 Lady Buccaneers win over Wayne Academy to open District 4AAA play.

Bowling Green took a 3-0 lead through the first inning. Wayne tied the game with three of its own in the fourth. The Lady Buccaneers went back into the lead in the fifth before Wayne knotted the game at 5-5 during the seventh, sending the game to extra innings.

Each team scored a run in the eighth before Fussell’s hit was the winner during the ninth.

Fussell went 3-for-4 with three runs batted in.

Spears tallied four hits in as many at bats with a double, an RBI and two runs scored.

Kylee Burris had a hit and an RBI.

The two met again in a makeup game on Thursday and Bowling Green won 7-1.

Spears recorded two hits, both doubles, to go with a pair of RBIs and a run scored.

Crowe tallied a pair of hits and a run scored.

Bowling Green’s next game is Monday, Sept. 7 on the road against Amite School Center. 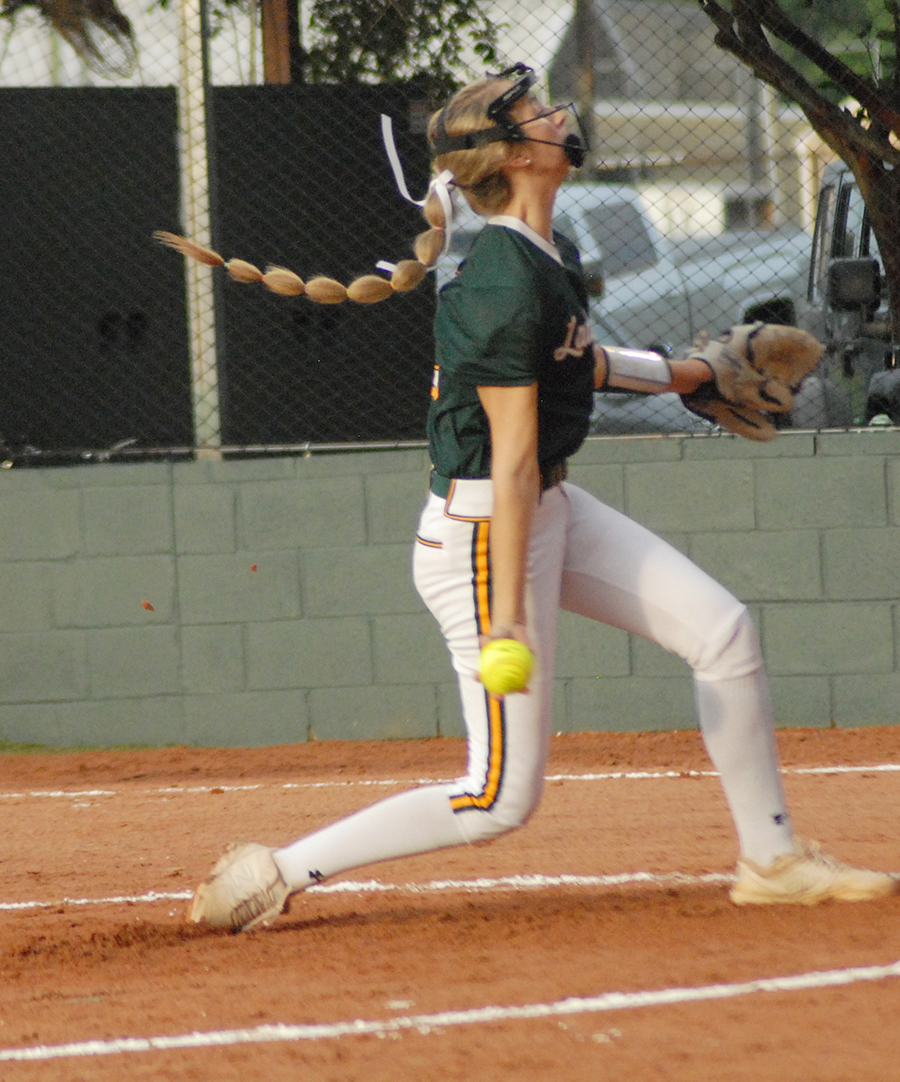 DAILY NEWS PHOTO/Chris Kinkaid
Bowling Green School’s Aleigha Fussell throws a pitch in Monday’s game. She was the winning pitcher in the Lady Buccaneers’ wins on Monday, Tuesday and Thursday.