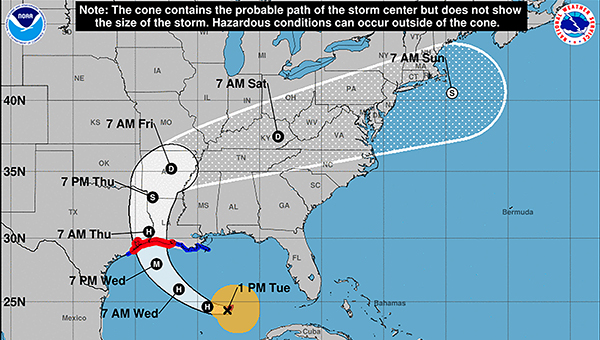 Local officials are keeping an eye on the development of Hurricane Laura, although as of Tuesday afternoon it did not appear as if the storm would be heading directly in the parish’s direction.

At 1 p.m. Tuesday, the National Weather Service in New Orleans was reporting that Tropical Storm Laura was projected to become a hurricane by late Tuesday evening. The NWS said that the highest local threat from Laura would be “life-threatening storm surge across coastal portions of Southeast Louisiana and Mississippi.”

Other threats for the region include a risk of heavy rainfall that could produce localized flooding issues and a few tornadoes, NWS officials said.

Most of the major impact area is forecast for the western portion of the state, as well as eastern Texas. Washington Parish is not forecast to be in the direct path of the storm, but rain is likely during the rest of the week.

As of Tuesday at 1 p.m., the NWS was not listing any watches or warnings in effect for Washington Parish. However, a “Storm Surge Watch” was in effect for St. Tammany Parish and southern Tangipahoa Parish.

The NWS’s detailed forecast for Bogalusa was as follows: