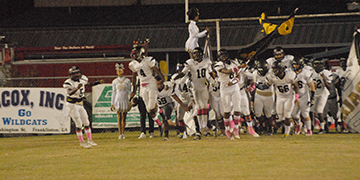 DAILY NEWS FILE PHOTO/Chris Kinkaid Bogalusa takes the field in a game held last season. The LHSAA football season could begin on Oct. 8 with teams beginning with their week three opponent and playing an eight-game season.

LHSAA football teams now have a plan for the upcoming season.

According to Bogalusa coach Adam Brumfield, the LHSAA sent the coaches a memo for how they intend to move forward with the 2020 season that is being delayed because of the COVID-19 pandemic.

The plan right now is to have an eight-game season and teams will begin with their week three opponent the week of Oct. 8.

“First and foremost, I’m glad we have an announcement because we’ve been sitting here in limbo and other states have had plans,” Brumfield said. “We’re trying to prepare ourselves. Boxers have a date for fights and they prepare themselves for that date. I’m glad we have a date. We knew it would be pushed back. I like the plan. You now have a date to prepare for and that’s what we want. If you look at the schedule, we lose our home opener against Istrouma and then we lose a road game against Pine. Since I’ve been at Bogalusa, I’ve scheduled every local team. I think it’s good for the community and the parish and they were the only parish team to beat us last year (50-31). We’re looking at possibilities of playing them in a scrimmage or jamboree.”

Brumfield said that to lose only two games with the virus is a positive to him.

The Lumberjacks still have matchups against two teams from Washington Parish ,with games against Franklinton and Varnado.

“The week one game is now against Franklinton and I think this pumps up the week one game,” Brumfield said. “I think Franklinton’s really going to be looking forward to playing us this year, and to have that parish-rival game week one is good for the fans, the players and the community. A rivalry is not really a rivalry unless the other team wins. With us winning last year, I think this game will be even more exciting this year.”

Pine coach Bradley Seal gave his thoughts on the plan.

“I just think that everybody is happy there is a plan in place,” Seal said. “Obviously, you want to play a full season, we’re just glad we have a date to work to and we’re just glad to be playing football.”

Under the plan, fans of the LHSAA teams in Washington Parish will all begin the season in the parish.