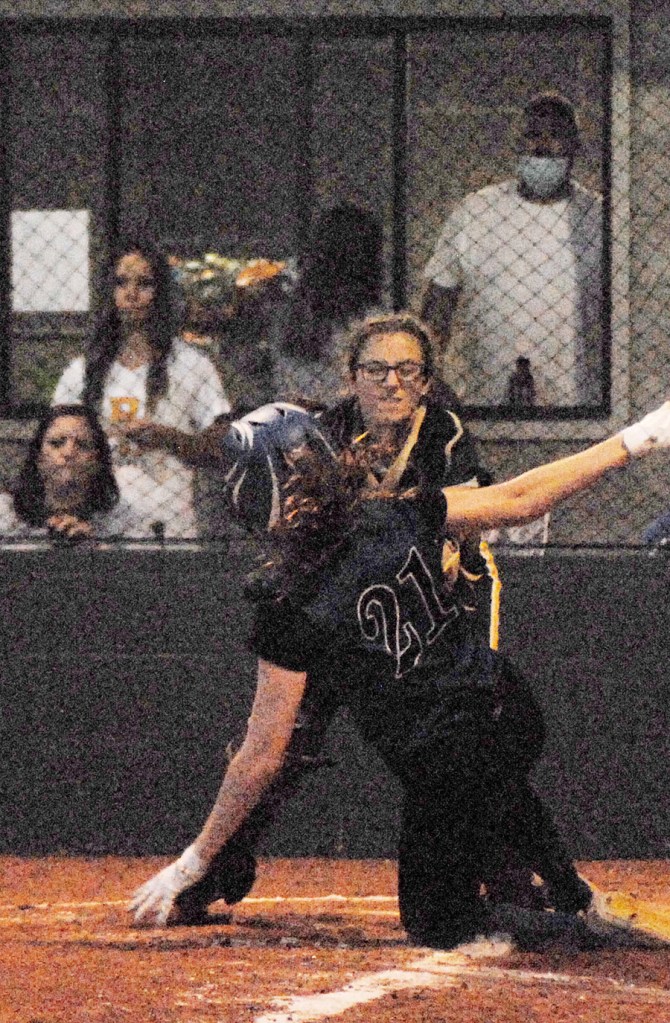 DAILY NEWS PHOTO/Chris Kinkaid Bowling Green School catcher Julia Berggren tags out a runner at the plate to complete a 9-2 double play after taking a throw from right fielder Elizabeth Wilkinson. Wilkinson caught the flyball and then threw to Berggren to get the runner, who tagged up from third and tried to score.

Bowling Green School’s Brylie Fowler recorded the game-winning double in a 6-5 walkoff victory that completed a comeback against Adams County Christian School to open the season Friday night at home.

KaKa Seal led off by putting down a bunt, but a throwing error allowed her to reach and Seal made it to second. That set up Fowler. Fowler took a pitch the opposite way to right field, sending Seal home with the winning run.

“I was nervous, very nervous, but I knew that I had to get just a base hit to score the run,” Fowler said.

Bowling Green overcame a 4-0 deficit and some missed scoring opportunities, but was able to win the game. The Lady Buccaneers left 11 runners on base with seven of them in scoring position. Defensively, Bowling Green made just one error, which allowed the second batter of the game to reach. Other than that, the Lady Buccaneers were flawless in the field.

”We struggled to throw strikes early. We played defense,” Bowling Green coach David Hood Burris said. “I don’t know if we had an error tonight. We hit a few batters, they got an early lead, but that’s what we teach our kids to do is to not quit and they did exactly that. Hats off to them. It’s all on them.”

Bowling Green trailed 4-0 after the top of the first inning.

Riley Walters reached on an error with one out and later scored on a wild pitch for the game’s opening run. Camren Strittman walked, Kate Parsons was hit and Georgia Martin walked to load the bases. Becca Cowan recorded an RBI walk that plated courtesy runner Halle Peterman. After the second out, Marlee McGarry hit a two-run single to right field. Martin and Cowan scored to make it 4-0.

Bowling Green countered with three of its own in the bottom of the frame.

Hallie Serigne hit an infield single, but the throw was wide and she reached second. Kylee Burris singled to put runners on the corners. Serigne got caught in a rundown on a would-be wild pitch, but an overthrow of third allowed her to score and put the Lady Buccaneers on the board during Anna Claire Crowe’s at bat. Crowe’s at bat ended when she launched a ball to deep centerfield and over the fence for a two-run homer. Bowling Green was within one at 5-3 through one inning.

Adams County Christian School added a run in the second. Zimmerman walked, stole second, took third on a passed ball and scored on a wild pitch for a 5-3 lead through two innings.

Aleigha Fussell entered the circle in the third inning and held Adams’ offense at bay, giving her team a chance to complete the comeback and they did. Fussell threw five innings of shutout ball, giving up just two hits, a walk and a hit by pitch, while striking out seven. At the plate, Fussell tallied a hit.

“She shut down when she comes in,” coach Burris said. “It’s lights out, doesn’t matter who the team is. I was proud of her. She was a little bit nervous. First time to ever pitch here on this field in front of these people, but she did great, she handled it well and we played defense behind her. We played good defense behind her.”

The Lady Buccaneers pulled within one in the fourth inning. Burris reached on an error with one out and later scored on an RBI double by Dixie Camille. It was 5-4 through four innings.

Bowling Green tied the game in the fifth. Seal walked. She then attempted to steal second, but the throw got past the fielders and allowed her to score the equalizing run and the game was tied at 5-5.

It remained tied until the seventh when Seal and Fowler combined on a pair of doubles for the winning run.

Crowe went 2-for-3 with the homer, a single, she got hit, drove in two runs and scored a run.

Camille posted three hits that included a double to go with a run batted in.

Albanie Fussell singled and got hit by a pitch.

Fowler doubled in a run.

Walters singled and scored a run.

Parsons was hit twice and scored a run.

Bowling Green is back in action on Friday with a home game against Centreville Academy. Junior varsity begins at 5 p.m. with varsity following.