Trio of Bucs are 1st-team all-district 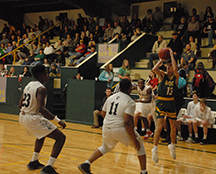 Three Bowling Green School basketball players are first-team all-district in the 4-3A league for the 2019-20 season.

Braden Edwards, Steven Scott Cooper and Jace Schexnider all made the top team for the Buccaneers.

Edwards nearly averaged a double-double this season. Edwards scored 12.5 points per game and grabbed 9.6 rebounds a contest to go with 4.4 assists.

Schexnider averaged 14.7 points a game, 3.4 steals and he dished out 4.1 assists a contest. Besides being an all-district player, Schexnider also made the South State All-Tournament Team.

The Buccaneers had one second-team all-district player in Rece Dillon.

This season, Dillon tallied 12.8 points and pulled down 5.3 boards per game.

Jenkins recorded 5.7 points per game along with 4.8 rebounds and he blocked 2.6 shots a contest.