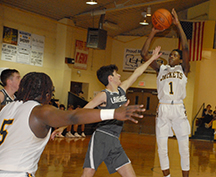 DAILY NEWS PHOTO/Chris Kinkaid Mt. Hermon School’s Travell Brumfield attempts a shot in a game this season, as Tevin Williams (5) is pictured down low. Both are first-team all-district players.

Tevin Williams and Travell Brumfield made the top team.

Both players averaged a double-double in district play.

Williams went for 19.5 points per game along with 12.3 rebounds to go with three assists and 4.2 rebounds.

One Yellow Jackets’ player is on the second-team in Michquel Spears.

Spears averaged 13.6 points a game in district, while dishing out three assists and 4.7 steals per contest.

This year, Mt. Hermon School made the playoffs as the 15th-seeded team and reached the regionals, but lost to state champion and second-seeded Doyline, 83-67.

Runnels’ Collin Coates is the league’s Most Valuable Player.

Runnels was the second-seeded team in Division V and reached the state title game before being defeated by top-seeded Jehovah-Jireh, 64-45, to finish as state runner-up.

Besides Williams, Brumfield and Coates, the rest of the first-team all-district players includes, Runnels’ Ben Holliday and Holden’s Hartland Litolff.

Holden was the 16th-seeded team in Class B, but lost in the opening round to regional round team No. 16 Florien, 87-83, in overtime.

Christ Episcopal School made the Division V postseason as the seventh-seeded team,but lost to No. 10 and quarterfinalist University Academy of Central Louisiana, 54-39.