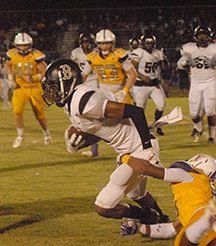 DAILY NEWS PHOTO/Chris Kinkaid Bogalusa’s Raheem Roberts attempts to break a tackle in a game last season. He has been selected for the 2020 Maxpreps preseason first-team all-Louisiana football team at the athlete position on defense.

Bogalusa’s Raheem Roberts has had plenty of accomplishments in 2020 and now he has another.

The 2020-21 senior has been selected to the 2020 Maxpreps preseason first-team all-Louisiana football team at the athlete position on defense.

In the 2019 season, Roberts intercepted seven passes on defense.

Offensively, he recorded 28 catches for 424 yards and five touchdowns.

Being preseason all-Louisiana adds another achievement for Roberts in 2020 and he has had plenty just this year alone.

In 2020, Roberts, who is a two-sport athlete, also competes in track/field. He won the indoor triple jump state title in Division 2 at 45 feet, 4.25 inches. He was also a 2020 all-state triple jumper that was picked by the Louisiana Track and Field Coaches Association.

Going back to football, Roberts is ranked as the top player in the athlete position in the state for the Class of 2021 on 247sports.com’s top 247.

Roberts is a three-star recruit on the website. He is the 19th ranked player in Louisiana for the Class of 2021.

Earlier this month, Roberts committed to attend the University of Memphis. 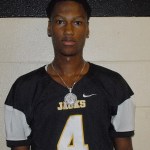