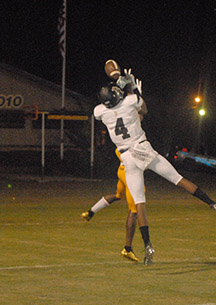 DAILY NEWS PHOTO/Chris Kinkaid Bogalusa’s Raheem Roberts attempts to catch a pass in a game last season. Roberts has verbally committed to the University of Memphis.

Bogalusa’s Raheem Roberts has verbally committed to the University of Memphis to play football for the Tigers.

“I’m very excited. I’m ready to get up there,” Roberts said.

Roberts talked about his decision.

“I felt like it was the right decision for me and they made me feel like I was family and they put receivers in the NFL,” Roberts said.

Roberts, who plays both wide receivers and defensive back, said he would be playing receiver, but may see snaps at defensive back.

Roberts said now that the decision is out of the way, his main focus is on the upcoming season.

“Now I am just focused on my team and hopefully we have a season so we can reach our goal of getting to the Superdome,” Roberts said.

Roberts, who is a senior, was heavily recruited and is ranked No. 1 in the state for the position of athlete and 19th overall in the state www.247sports.com on Top 247 for the Class of 2021. He is 46th overall at athlete in the country on the recruiting site.

Roberts, a three-star athlete, plays wide receiver and cornerback for the Lumberjacks and recorded 28 receptions for 424 yards and five touchdowns.

Roberts was a first-team all-district player in 2019 at wide receiver and defensive back. He was also a second-team Louisiana Football Coaches Association Class 3A All-State wide receiver-tight end.

Roberts was also a second-team wide receiver in 2018.

“He’s a very talented player who has made some big plays for us and has continued to improve each year,” Bogalusa coach Adam Brumfield said. “He’s got the size, speed and strength to compete at the next level. Memphis got a good football player. He’s had several good years for us, but I think the best is yet to come.”

The Lumberjacks opens the 2020 regular season with a home game against Istrouma on Sept. 4. 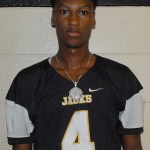