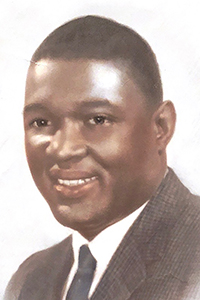 “The steps of a good man are ordered by the Lord; and he delighteth in his way” (Psalms 37:1).

Normel Keller Sr. was born on July 5, 1929, in Bogalusa, to the late Eddie Keller Sr. and Robbie Wicker Keller. He was the second of six children and grew up in the Poplas Quarters community of Bogalusa. Mr. Keller went to be with the Lord on Saturday, June 27, 2020.

He excelled academically and graduated as salutatorian from Central Memorial High School in 1947. Throughout his high school years, he played tackle for the CMHS Spartans. He excelled in this position and earned a four-year scholarship to Southern University. At SU, he became a four-year letterman and starter. He was named a Pittsburgh Courier All American, and captained the 1951 National Championship Jaguar team.

Mr. Keller served his country proudly during the Korean War, and during that conflict received a Purple Heart, Bronze Service Star, and the UN Service Medal. After being discharged from the army, Mr. Keller coached for two years at Arcadia High School. After 40 years of service in public education, Mr. Keller retired in 1992.

At an early age, Deacon Keller accepted Christ and joined Sweet Beulah Baptist Church. Deacon Keller dedicated his life to God, his family, and his community. He began his Christian service at the age of nine years old — serving as Sunday School secretary and teacher. Throughout his life no job was too big or too menial when it came to his family and his church. Throughout his 81 years of service at Sweet Beulah, he served as Sunday School Superintendent, Brotherhood President, Finance Director, and Deacon Board President.

Mr. Keller was preceded in death by his parents; three brothers, one sister, and two sisters-in-law, Eddie (Rose Mary) Keller Jr., Devon (Lessie) Keller, Dennis Keller, and Marcella Keller. He leaves to mourn, his wife, children, grandchildren, his baby sister, Lulla Jo Keller of Bogalusa; and sister-in-law, Hazel Keller of Maywood, Ill.; and a host of nieces and nephews, whom he loved dearly.

Service for Deacon Keller will be Thursday, July 2, at 1 p.m. at Crain and Sons Funeral Home in Bogalusa, with the Rev. Dr. James Magee, pastor, officiating. Interment will be held in the Bogalusa Cemetery. The service will be observing the CDC guidelines for COVID-19.