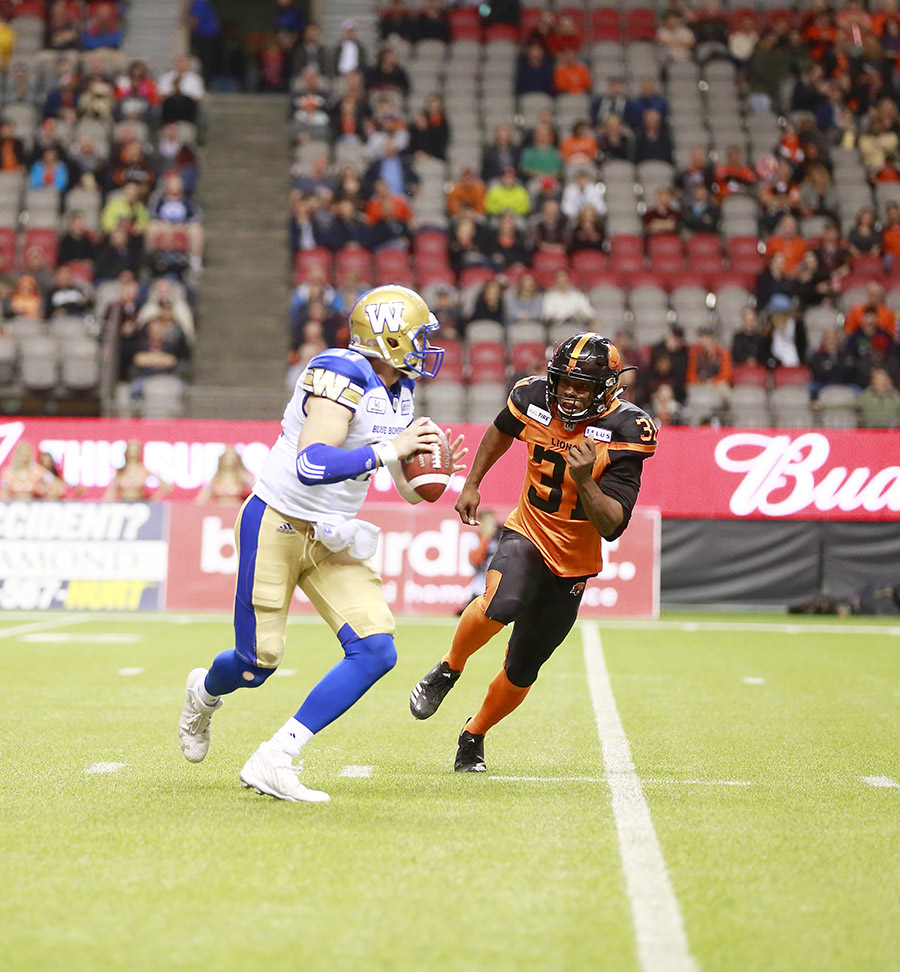 COURTESY FILE PHOTO/Jeff Vinnick/BC Lions Otha Foster III rushes the passer in a game a couple of years ago.

The Canadian Football season should be in week three and the Saskatchewan Roughriders and  Otha Foster III should be getting ready for a road game against Hamilton Tiger-Cats on Thursday, but the COVID-19 pandemic did not allow the season to get started and there is currently no start date set yet.

Despite the uncertainty of when the season begins, Foster, a 2006 Varnado High School graduate, is staying ready.

“Recently, I just had a baby (boy named Otha Foster IV), so I haven’t been doing a lot, but I started back (June 16),” Foster said. “We’ve got a hill next to my house. I’m not going to lift weights as much. Gyms are just opening up here, so I will be getting in the gym more. Just got to be cautious (because of COVID-19). I’m doing footwork drills, running that hill and doing position drills. I feel when the season does start, it’ll be about who can run and last the longest because it’s going to move quick when it starts. You won’t have that time to get in shape when you get to camp. Sometimes, you can get into real football shape when you get to camp. This year, camp probably won’t last that long.”

This is Foster’s sixth season in the CFL. The safety/linebacker played for five years. He did not play last season and signed with the Roughriders this offseason. He played his first two years with Edmonton, the next two with Saskatchewan and then B.C. in 2018.

“Sitting out makes me more eager and I want to prove to the people that I can still play and still can contribute to winning another Grey Cup,” Foster said.

Foster was a West Division All-Star in 2018 when he was with B.C. when he posted 58 stops, one special teams tackle, three sacks and two forced fumbles.

Foster said he is looking forward to playing in front of the Saskatchewan fans, which he called the best fans in North America.

“The Saskatchewan fans are second to none in my opinion to sports fans in North America,” Foster said. “I remember showing up there when I was in Edmonton for two years and I was like golly. This was in their old stadium. It was cold and it was packed and it was loud. When I became a Saskatchewan Roughrider, I got to see that and how much they love their team. Jersey sales are always No. 1, stands are always full, they love their Roughriders and they’re very loud and they travel. When I was playing in Edmonton, there were just as many or maybe more than Edmonton fans. When I played for B.C. there were more Saskatchewan fans than B.C. fans. It was almost like we were playing an away game at home.”

Last season, the Roughriders led the league in averaged scanned attendance per game and was also the league leader in sold tickets. Saskatchewan also leads the league in merchandise sales.