FHS grad is ‘hero’ on the diamond 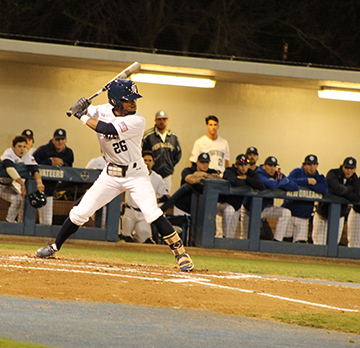 COURTESY PHOTO/Shane Banegas/UNO Athletics University of New Orleans outfielder prepares for a pitch in a game this season. The 2017 Franklinton High School graduate is the UNO male Privateer Community Hero for having the most community service hours among all male athletes at the school.

There’s a saying that not all heroes wear capes.

In this case, a former high school player from Washington Parish carries a baseball glove, a bat and plays games on a diamond.

The recipients of the award are the male and female athlete at UNO who led the community in service hours.

“It’s very important because most people want to give back and they can’t, but for an athlete, it’s a great understanding of yourself as a person,” Crain said about the importance of giving back. “You can be a great person on-and-off the field.”

Crain said it was a big honor to win this award.

“The individual award says a lot. There was a competition within the school. We had a competition to see who would win the Privateer Cup, and being able to help out in that area was pretty big for us,” Crain said.

The Privateer Cup goes to the UNO sports team with the most service hours. Baseball won that award.

The baseball team was also second among Division I baseball schools in community service hours. Only Georgia Southern had more.

“It was pretty fun,” Crain said. “The Buddy Walk was this thing to help people with Down Syndrome. One of my coaches, (assistant) coach Stew (Brett Stewart), he has a kid who has Down Syndrome. To put smiles on those kids’ faces was a big thing.”

Some of Crain’s community service hours were done with the team and on his own.

On his own, Crain participated in a program called Son of a Saint where children go to UNO’s campus to get help with homework. Crain said he mostly helped them with math.

As a team, besides the Buddy Walk, the group helped out in plenty of areas like the MDA Muscle Walk of Southeast Louisiana, Relay for Life of St. Charles Parish, Saints 5K Kickoff Run and Special Olympics Present: Trunk or Treat to name a few.

Women’s basketball player Traya Bruce, who did 63 hours of community service throughout the year, is the Privateer Community Hero female athlete.