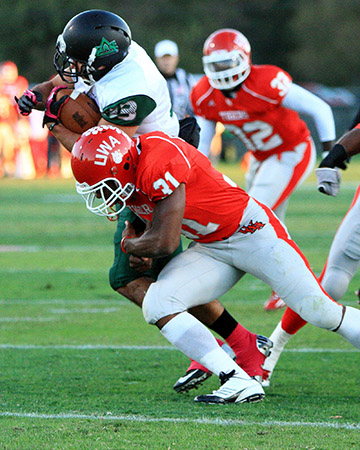 COURTESY PHOTO/UWA Athletics Otha Foster III attempts to make a tackle in a game when he was at the University of West Alabama. The 2006 Varnado High School graduate made UWA’s all-decade team. He played for the Tigers in 2011 and 2012.

A football player who prepped at a local high school has made the all-decade team for his college.

During his time at the University of West Alabama, Foster was an all-American, all region and an all-Gulf South Conference player.

At UWA, Foster, who played defensive back, made 10 interceptions over his two years along with 96 tackles and he broke up 16 passes. Foster is in University of West Alabama’s top eight with his interception total and he is tied with several others with three picks in a game. He was the GSC interception leader in 2012, picking off six passes.

Butler, a defensive back, is one of the notable players on the all-decade team.

Another notable player on UWA’s all-decade team is returner Tyreek Hill, who played for the Tigers in 2015. Hill, who was drafted in the fifth round by Kansas City in 2016, has been a receiver and returner with the Kansas City Chiefs since 2016.

During Foster’s time at UWA, the Tigers posted a 17-8 record, going 8-4 and 9-4 respectively, and made the playoffs both seasons. The University of West Alabama lost in the first round the first year and reached the second round the following year. UWA won its first outright conference title in 2012.

Despite the setbacks in the NFL, Foster has had plenty of success in the Canadian Football League.

Foster did not play last year, but signed with Saskatchewan in February.

“I’m very excited,” Foster said. “I’m 31, going on 32 in September. To be playing football at this age and still being able to play at a high level, it’s a blessing. At the end of the day, I’m just ready to go out there and smack somebody.”

Over his CFL career, Foster has made 242 defensive tackles, 10 on special teams, nine sacks, three interceptions and forced fumbles. He also has two touchdowns. 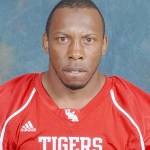