Locals are headed to 3 NFL teams

Three former high school players from schools in Washington Parish are headed to the NFL after signing as undrafted free agents.

Varnado’s Abrams, out of the University of Colorado, signed with the Atlanta Falcons.

This season, Abrams made 54 tackles along with a sack, a tackle for loss and he broke up seven passes.

After graduating from Varnado, Abrams went to Independence Junior College in Independence, Kan. for two years before going to the University of Colorado.

Abrams said he was not frustrated about not getting drafted.

“Everything happens for a reason and God has a plan for you,” Abrams said.

Another part for Abrams signing with the Falcons is that he will get to play close to home for the first time since high school.

Besides playing in Atlanta, which is fairly close to home, the Falcons also play a game in New Orleans and Tampa Bay each year. They also scheduled to have a road game against the Dallas Cowboys this season.

Abrams said his strength is being able to be physical and his length.

Pine’s Dillon, from LSU, signed with the New York Giants.

“It’s definitely exciting,” Dillon said. “It’s part of a dream coming true. There’s a lot of work that has to be done, but I’m ready to get out there and start working.”

Dillon said that he was frustrated that he did not get drafted, but said he is thankful he gets to play on somebody’s team.

Dillon said his strength is speed, physicality and route running.

Franklinton’s Magee, out of LSU, signed with the New Orleans Saints.

This season, Magee was a second-team all-Southeastern Conference offensive lineman.

“Going through the whole thing, it was pretty frustrating, not hearing my name called and not getting any phone calls. But then finally waking up to a free agent deal the next day kind of brightened up my day,” Magee said.

Magee said that getting to the NFL has been a dream of his.

“I’m still kind of shocked about it,” Magee said on Monday. “That night (Saturday), I was so down and discouraged and didn’t want to talk to anybody and I vented to myself. I got that call the next day (Sunday) and it felt good that somebody believed in me.”

One of Magee’s former teammates from LSU, Willie Clapp, is also an offensive lineman for the Saints. Clapp enters his third year with New Orleans. Clapp was picked by the Saints in the seventh round of the 2018 draft (pick 245).

Magee said Clapp being on the Saints will help out.

“I can get ahead a little bit more. He can teach me a few more things,” Magee said. 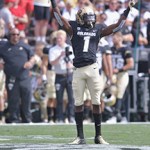 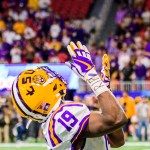