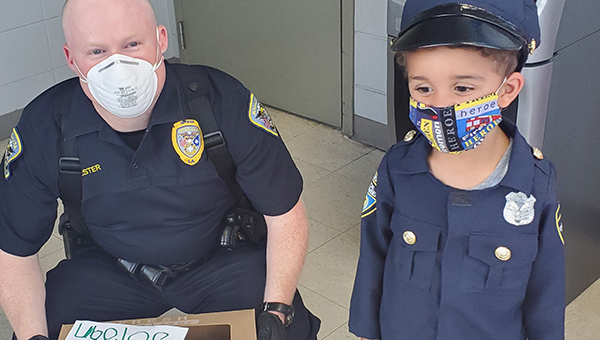 Jordan Williams, 4, gives a thank you card and cake to Lt. Ryan Rester, on behalf of the Bogalusa Police Department, on Thursday night. Rester and other BPD officers rode by Jordan’s house on his birthday Wednesday night, and also presented him with gifts.

The COVID-19 pandemic has changed the lives of nearly all Americans, but it can be especially tough to explain those changes to the youngest among us.

Samantha Williams ran into that problem recently, when her family was forced to cancel a planned birthday party for her 4-year-old son, Jordan. Jordan was hoping to have a party on Saturday, April 11, at a Slidell ice cream parlor, but those plans had to be canceled due to the COVID-19 pandemic and its limits on public gatherings.

However, the Bogalusa Police Department helped pitch in to give Jordan a special surprise on his actual fourth birthday Wednesday, in hopes of helping to make up for the party cancellation.

Samantha Williams said Jordan has always loved police officers, and hopes to be one when he grows up. Williams is friends with the wife of BPD Lt. Ryan Rester, who helped set up a surprise visit by BPD officers to Jordan’s house Wednesday evening.

“Officer Rester’s wife called me and told me to come outside with Jordan,” Samantha Williams said. “Jordan had no idea they were coming.”

Of course, the BPD was under the same restrictions as the rest of the state, so Jordan could not come close enough to give the officers high-fives or talk to them. However, they were able to ride by with their patrol cars while displaying blue siren lights.

In addition, the police returned later that night and BPD Officer Casey Hidalgo presented Jordan with some Paw Patrol-themed gifts.

“It made my day special,” Jordan said. “I like them (the police) because they protect us.”

Williams said that her family usually holds big events with dozens of people, so it was especially tough for them to cancel Jordan’s planned party with his friends.

“It’s a big deal for us to cancel something like that,” she said. “We were still able to do some fun stuff with Jordan throughout the day on Wednesday, but that visit from the BPD really made his birthday extra special.

“I just thank the BPD for what they do for the community. We have some great officers here.”

Rester said that he and the other officers were happy to help out.

“We’re all dealing with a bit of a unique thing, with this coronavirus,” he said. “Anything that we can do, to help brighten a kid’s day, is a good thing.”

Williams and Jordan later paid additional thanks to the BPD by having a cake delivered to the police station Thursday night, and then going over to make a visit. Williams said that Jordan wanted to share a piece of his birthday cake with the officers on Wednesday night when they came to visit his house, but obviously he could not, due to the COVID-19 restrictions.

However, Thursday’s visit to the BPD allowed Jordan to still show his appreciation with cake and a thank-you card that he made for the officers. He made the visit dressed in his favorite police uniform costume as well, to make it extra special.