Franklinton and Pine played all of their games at home.

The Demons opened the tournament with a 10-2 victory over Jewel Sumner on March 12.

Franklinton broke open a 2-0 game through two innings with four runs in the third.

Jalen Burkhalter went 3-for-4 that included a double with a run batted in and a run scored.

Noah Breland doubled and scored a pair of runs.

Banyan Penton had a hit and two runs scored.

Will Turner recorded a single and an RBI.

Dillon Pace allowed an unearned run on one hit with three strikeouts and a walk in two innings of relief work.

The next day, Franklinton defeated Bogalusa 15-0 in five innings.

Turner singled, drove in four runs and scored a run.

Burkhalter and Breland each tallied a hit and two runs scored.

Franklinton played a pair of games on March 14, coming up short in the first and winning the second.

The first contest was a 12-9 loss to Walker.

Wyble went 2-for-3 with a run scored.

Wascom posted a hit, an RBI and a run scored.

Breland had a hit.

McKenzie drove in three runs, while Turner and Banyan Penton collected one RBI each and A.J. Magee scored a run.

The Demons’ final game of the tournament was a 12-0 win over Varnado in five innings.

Burkhalter posted three hits, all were doubles, three runs scored and an RBI.

Keller put up two hits, one for a triple, with two RBIs and a pair of runs scored.

McKenzie recorded a pair of hits that included a double, a run scored and an RBI.

Turner singled and drove in a run.

Ginn scored two runs and drove one home, while Breland scored a pair of runs, Maxwell and Bracey scored a run each and Wascom drove in a run.

Turner was the winning pitcher after throwing four shutout innings allowing just two hits with two strikeouts and a walk.

Breland pitched a shutout inning of relief with a strikeout and a walk.

Chase Cooper doubled, drove in a pair of runs and scored two runs.

Luke Fonda tallied a hit with a run scored and an RBI.

Coby Sheridan and Bryson Thomas tallied two runs each, while Devan Whaley drove in a run.

Pine played Walker once in each of the next two days.

Varnado was defeated in its two games.

Bogalusa was topped in its three contests. 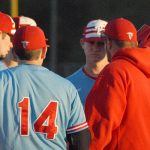