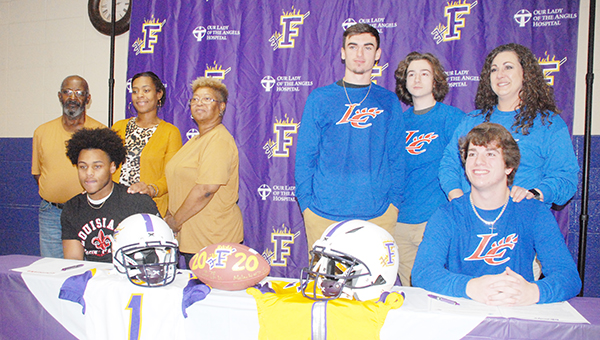 Franklinton teammates Mike Martin and Noah Breland recently signed letters of intent to play college football. Martin signed with the University of Louisiana at Lafayette and is seated left of the football with family members standing behind him from left, Prentise Cuffee (grandfather), LaShun Burkhalter Martin (mother) and Olivia Cuffee (grandmother). Breland is seated to the right of the football. He signed with Louisiana College. Standing behind him are Franklinton quarterback and his cousin Jasper LaSalle, Braxton Breland (brother) and Franklinton teacher and his mother Holly Breland.

Franklinton senior Mike Martin has signed a letter of intent to attend the University of Louisiana at Lafayette and play football for the Ragin’ Cajuns.

“UL, unlike all the other teams, they’ve been knowing me since day one, they never gave up on me,” Martin said. “When I went in to meet all the coaches, they were like, we love the way you run the ball and everything, and it just made me feel like home.”

Martin said he took two or three visits there, went on a game visit, and said his recruiter Michael Desormeaux went and saw Martin the week before signing day.

Martin said the recruiter told him that they wanted him and felt like he could impact their program.

“That’s really all I needed to hear,” Martin said.

This year, Martin ran for 1,015 yards and 22 touchdowns. He also caught 10 passes for 127 yards and two scores. Martin also set a single game school record when he ran for five touchdowns against Jewel Sumner.

Martin has been a first-team all-district player the last two years and he was selected to the Children’s Hospital of New Orleans North Shore All-Star Game.

“He’s been the guy that we’ve kind of built our offense around,” Barber said. “Obviously, there’s many pieces that go to offense, and that’s not saying that to discredit to anyone, but Mike Martin’s been the focal point. He’s a tough inside runner, a physical kid with a heart of a lion. I’m extremely proud of him for getting this opportunity and hopefully he takes it and runs with it.”

Martin is undecided on his major, but said he wants to become a coach in high school and work his way up to being a college running backs coach.

Franklinton’s Noah Breland has signed a letter of intent to go to Louisiana College and play football for the Wildcats.

“It was a great place,” Breland said. “I first earned my offer when I went to a Louisiana College camp and all the coaches since that point in time have always treated me like a family. I went there on my official visit and I just fell in love with the place.”

Breland feels this will be a great opportunity.

“They just got a new head coach and I get to meet new friends, new people, create a new family and I’m just blessed to receive this opportunity,” Breland said.

During the regular season, the senior linebacker made 54 tackles, including five for a loss, a sack and he recovered two fumbles.

Breland was a second-team all-district player and he was selected to the Children’s Hospital of New Orleans North Shore All-Star Game, where he forced a turnover with a fumble recovery.

“Noah’s a kid that has worked extremely hard for his opportunity,” Franklinton coach Jonathan Barber said. “Probably one of the most intelligent kids I’ve ever coached wise. Every question he had, there was a meaning behind it. I can see so much of my mindset and myself in him and I’m super proud of him for getting this opportunity. He’ll be successful at whatever he does. Outstanding young man, both of them are (Mike Martin as well, who signed on the same day) and I couldn’t be more proud of them.”

Breland said he is planning to pursue a nursing degree.